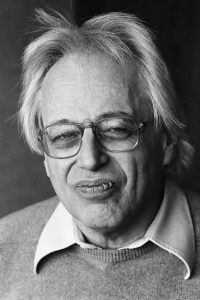 Eleven years ago today – on June 12, 2006 – the Hungarian-born composer György Sándor Ligeti died in Vienna. He was one of the greatest composers and teachers of the twentieth century; a man and composer who is not just a favorite of mine but something of a hero to me (and I am generally not one who suffers heroes).

Ligeti (the first syllable gets the accent) was born into a Jewish Hungarian family on May 28, 1923 in Romanian Transylvania, in the village of Diciosânmărtin. When he was six the family moved to the northern Romanian city of Cluj, the second most populous city in Romania after the capitol of Bucharest. In 1940, northern Romania was annexed by Hungary and thus Cluj became part of Hungary.

In 1941, at the age of 18, Ligeti entered the Cluj Conservatory. And that’s where he was when the Second World War caught up to him.

Background. The Austrian-Hungarian Empire was one of the big losers of World War I. The Empire was broken up in 1918, and that half of the Empire that was the Kingdom of Hungary was further broken up in 1920 by the Treaty of Trianon. This “new” Hungarian nation contained only 28% of the territory and 36% of the population of pre-war Hungary. Hungarian patriots gagged, spit, and swore that as god was their witness, they’d never be partitioned again.

So when it became clear in the mid-1930s that Adolf Hitler intended to repudiate the treaties and occupy territories it claimed as its own, Miklós Horthy, “His Serene Highness the Regent of the Kingdom of Hungary” allied Hungary with Nazi Germany and eventually became part of the German-led “Axis” (along with Italy, Japan, Bulgaria, Romania, and Thailand. Yes, Thailand!)

In acquiescence to German pressure Miklós Horthy instituted anti-Jewish laws in Hungary beginning in 1938 and forced labor service soon after. But as the war progressed he refused to deport the some 860,000 Hungarian Jews to extermination camps as Hitler demanded. On March 18, 1944 Hitler summoned Horthy to a conference in Austria. While Horthy was there, Germany invaded Hungary. Over the following months, roughly 650,000 Hungarian Jews were murdered; the bulk of them were deported to Auschwitz-Birkenau (including the 15 year-old Elie Wiesel), where 90% were killed on arrival.

In early 1944, the 20 year-old Ligeti was called up into a forced labor brigade, which saved his life. But the rest of his family was not so lucky. His 16 year-old brother was deported to the Mauthausen-Gusen camp and his parents to Auschwitz. Ligeti’s mother was the only other immediate member of his family to survive the war.

I have tested your patience with this lengthy historical exposition for an important reason. Those composers who “came of age” during World War Two – like Ligeti, Karlheinz Stockhausen, Iannis Xenakis, Pierre Boulez, Luigi Nono, and George Rochberg, to name a few – could not, after the war, go back to writing music the likes of which had been written before the war. They had seen too much; experienced too much; and come too far. They needed – each and every one of them – to find a musical language that resonated with the new, atomic age; a musical language devoid of the nationalism, the triumph of ”feeling” over reason, and the mystical romanticism that were deemed responsible for fascism and Nazism in the first place.

Ligeti’s Atmosphères for orchestra (of 1961) is his first mature masterwork, a piece of “sound mass” music that begins with one of the most astonishing cluster sonorities ever composed: 59 different pitches spread out across a five-and-a-half octaves are quietly played simultaneously! It is from this massive, mysterious, ur-cluster that the piece evolves, as sonorities slowly merge one into another, creating an ebb and flow of blur and focus, of chromatic haze and sharply etched sounds.

Ligeti’s ear for timbre (tone color) and his dramatic instincts were spectacular. The body of work he composed in the 1960s represents, for me, the pinnacle of sound-mass music. Three of Ligeti’s greatest works from this period – Atmosphères, Requiem (composed in 1965), and Lux Aeterna (of 1966) were all used by Stanley Kubrick in the soundtrack for 2001: A Space Odyssey of 1968.

(Therein lies a tale. Ligeti’s publisher – Universal Editions – negotiated the movie rights without ever consulting with Ligeti. So Ligeti only found out about it after the movie was released. He went ape (pardon that 2001 appropriate pun), and in his fury called the movie “a piece of Hollywood shit.” But of course, the movie was not Hollywood merde but rather, a masterpiece, made that much more so by the inclusion of a total of 32 minutes of Ligeti’s music. For our information, the 10 minute long psychedelic, “star gate” episode near the conclusion of the movie is accompanied by almost complete renderings of Ligeti’s Atmosphères and the Kyrie from his Requiem. Alex Ross goes so far as to call this amazing sequence “a concerto for film images and orchestra.”

But back to Ligeti’s fury over the use of his music. Apologies were made, money changed hands, and thanks to 2001, Ligeti was suddenly world famous. So – wisely – he bore Kubrick no hard feelings. As a result, when Kubrick wanted to use Ligeti’s music in the movies The Shining [of 1980] and Eyes Wide Shut [of 1999] he was able to do so, after having first obtained Ligeti’s permissions of course!)

Ligeti’s post-1980 music moved away from the massed sounds of his earlier work towards a more traditionally contrapuntal idiom in which major and minor triads and modes make up much of the harmonic and melodic substance. His Horn Trio of 1982 (inspired by and dedicated to Brahms) and his Piano Concerto of 1988 are dazzling: filled with extraordinary rhythmic action and interplay; rapid, kaleidoscopic changes of texture and, at the same time, great lyricism and humor.

Between 1985 and 2001, Ligeti composed three books of piano etudes, 18 in all. They are off-the-charts virtuosic, compositionally and pianistically; there’s really nothing else like them in the repertoire. They represent a virtual late twentieth century slice-of-musical-life; by Ligeti’s own description, they were influenced by, among others things, Indonesian Gamelan music, African polyrhythm, Bulgarian music, the music of Béla Bartók, Conlon Nancarrow’s music for player piano, and the music of jazz pianists Thelonious Monk and Bill Evans!

Here on this eleventh anniversary of your death, we remember you, maestro, and we are grateful for what you left us.