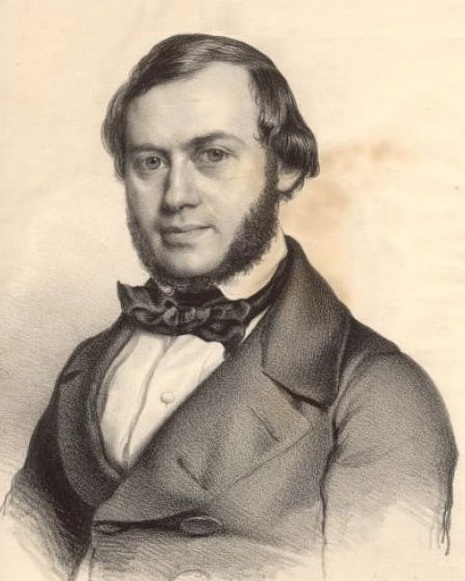 Today we recognize and celebrate the birth, 207 years ago today, of someone who can rightfully be called “a musician’s musician”: the violinist, composer and teacher Ferdinand David.

We will get to the specifics of Maestro David’s life and career in a moment. With your indulgence, a brief bit of editorializing.

So it is with certain musicians as well. The pianist Yuja Wang, for example. She is brilliant, but so are lots of other elite pianists. Ah, but those other pianists don’t come out on stage like Ms. Wang wearing micro-micro-miniskirts and 6-inch stiletto heels. Then there’s the pianist Lang Lang, whose performance shtick has become so exaggerated that he is, for many of his fellow professionals, impossible to watch. (And for others, impossible to listen to, as evidenced by his unfortunate sobriquet of “Bang Bang”.)

The fact that both Ms. Wang and Mr. Lang have inspired millions of Chinese children to take up the piano is admirable. That is a function of their stardom, which is function of their personas. Which means that at the end of the day, their concerts are as much (if not more) about selling a personal brand than of the particular music under performance.

(This is not a new issue. Franz Liszt was without a doubt the greatest pianist of his time. But the Liszt legend was a product of his performing persona, which bordered on carnival hucksterism. Many of his greatest contemporaries, including Clara Schumann, Johannes Brahms, and Joseph Joachim, were physically revolted by Liszt’s onstage shenanigans. But Liszt did indeed put people in seats and money in the bank.)

Speaking as an educator who wants to see concert music thrive, I’ve no objection (in theory at least) to Yuja Wang’s shoes and Lang Lang’s flamboyance. However, speaking as a composer, such performers drive me crazy. As to why, I would invoke the title of a book by the conductor Eric Leinsdorf: “The Composer’s Advocate” (Yale University Press, 1981). For Leinsdorf, a performer is – first, foremost and always – a composer’s advocate. In his introduction he writes:

“The indispensible partners of knowledge [and technique] are imagination, thoughtful intelligence, and ultimately the willingness to forget ourselves in the service of what we undertake to represent – the composer and his [or her] music.”

The operative phrase: “forget ourselves in the service of the music.”

As a composer, I want a composer’s music to come first in a performance and not the performer. I want to hear, understand, and be elevated by the music, and not be distracted by high heels, uncombed hair, and buttock movements more appropriate to hemorrhoidal discomfort than pianistic execution. I want performers to forget themselves in the service of the music.

Admittedly, there is a fine line between passionate execution and off-putting extravagance, but I know when that line has been crossed and I, personally, do not like it. Give me the likes of András Schiff, Martha Argerich, Maurizio Pollini, Alicia de Laroccha, Emil Gilels, and Murray Perahia any day over the foolishness that often passes for “pianistic persona” on the concert stage.

Which brings us – finally – back to our birthday boy, the violinist, composer and teacher Ferdinand David. By coincidence, he was born in Hamburg in 1810 in the same house as Felix Mendelssohn was in 1809. The shared location of their births was but the first of the parallels between them. They were both born Jewish though converted to Christianity later in life. They were both child prodigies: David as a violinist and Mendelssohn at pretty much everything. They both ended up in Leipzig, where Mendelssohn became the conductor of the Gewandhaus Orchestra in 1835 and David its concertmaster in 1836. When Felix Mendelssohn founded the Leipzig Conservatory in 1843, David became the first chair of the violin department. And when Felix Mendelssohn composed his one and only violin concerto – in E Minor, in 1844 – it was David who helped Mendelssohn fashion the violin part. Mendelssohn dedicated the concerto to Ferdinand David and David gave the concerto its premiere under Mendelssohn’s baton on March 13, 1845.

Ferdinand David was not just a ”musician’s musician” (meaning that other musicians respected him tremendously); he was, even more, a “composer’s musician”: someone who always put the music first. We read – everywhere – of his scrupulous attention to musical detail; of how his astonishing technique was always employed in the service of the music he performed and never for personal vainglory; and of what a wonderful colleague he was both a performer of chamber music and as concertmaster of the Gewandhaus Orchestra.

David was a beloved teacher, and he made the Leipzig Conservatory a virtual Mecca of violin study. His personal impact on the next 100 years of violin playing has no equal. His students in Leipzig included Joseph Joachim, for whom Brahms composed his magnificent Violin Concerto in D Major, Op. 77 in 1878. Among Joachim’s students was the great Leopold Auer, for whom Tchaikovsky composed his Violin Concerto in D Major, Op. 35. Among Auer’s students were three of the greatest violinists of the twentieth century: Mischa Elman, Jascha Heifetz, and Nathan Milstein, all of whom continued Ferdinand David’s legacy of putting the music first.

A fascinating postscript. Ferdinand David played a violin built in 1742 by the great Cremonese luthier Giuseppe Guarneri. It eventually became Jascha Heifetz’ primary violin (among others, Heifetz owned two Stradivari violins, though the Guarneri was his favorite and the one he kept until his death in 1987). Heifetz willed the violin to the Legion of Honor Museum in San Francisco, with the instructions that it may be taken out and played “on special occasions.” It is now on permanent loan to Alexander Barantschik, the concertmaster of the San Francisco Symphony. If you want to hear Ferdinand David’s violin, you’ll just have to come to San Francisco!