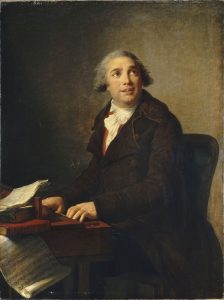 Giovanni Paisiello at the clavichord, 1791, by Marie Louise Élisabeth Vigée-Lebrun

On June 5, 1816 – 201 years ago today – the Italian opera composer Giovanni Paisiello died in Naples at the age of 76. Although almost entirely forgotten today, Paisiello was – in his lifetime – among the most famous, successful and popular opera composers of his time. He composed an absolutely amazing amount of music, including 94(!) operas, a tremendous amount of church music (including passions, oratorios, sacred cantatas, canticles, hymns, psalms and 8 masses), over 50 instrumental works (including 9 string quartets and 8 concerti for keyboard), 20 secular cantatas, and a huge number of stand-alone songs. Whoa.

His operas, written in the direct, tuneful, so-called “Neapolitan Style”, were instrumental (pardon the pun) in creating the newfangled comic opera (opera buffa) style that was embraced by audiences across Europe during the Enlightenment. Most important, at least to my mind, is that Paisiello’s over 80 comic operas had a decisive influence on one Wolfgang Mozart, who went on to elevate the erstwhile popular genre of opera buffa to the level of highest art.

Paisiello’s single most popular opera was The Barber of Seville or The Futile Precaution, composed in 1782 while he was living in St. Petersburg and working for the Russian Empress Catherine II (“The Great”). Paisiello’s Barber is a loose adaption of the play by Pierre-Augustin Caron de Beaumarchais, which created a sensation when it was performed in St. Petersburg in 1780. In his dedication of the opera to Empress Catherine, Paisiello wrote:

“Since Your Imperial Majesty had a taste of Le barbier de Séville I thought that the same piece set as an opera would not displease you; consequently I have made an extract from it which I have attempted to render as short as possible, conserving the expressions of the original piece without adding anything.”

Writing in the New Grove Dictionary of Opera, the musicologist Gordana Lazarevich is unstinting in her praise of Paisiello’s Barber:

“As an expression of the aesthetic values and tastes of the late eighteenth century, Paisiello’s The Barber of Seville is a masterpiece.”

We fast-forward 33 years, to December 26, 1815. That was the day that a 23 year-old, Naples-based operatic wunderkind named Gioachino Antonio Rossini signed a contract to compose an opera to be produced at the single most sumptuous and prestigious theater in Rome, the Teatro Argentina. It was decided that the new opera would be based on Beaumarchais’ Le barbier de Séville. Anticipating trouble from the public – which considered Paisiello’s Barber to be a “sanctified classic” – the theater management printed a lengthy “Warning to the Public” stating that “out of respect and veneration for the greatly celebrated Paisiello” the work was newly adapted, newly versified, and renamed as Almaviva or the Futile Precaution.

Young though he was, Rossini was nobody’s fool, and he knew that he would have to to take some useful precautions as well. So he sat down and wrote the 75 year-old Paisiello. Many years later, Rossini described his letter this way:

“I declared to him that I had not wanted to enter into a contest with him, being aware of my inferiority, but had wanted only to treat a subject that delighted me, while avoiding as much as possible the exact situations in his opera.”

Paisiello appeared satisfied by Rossini’s obsequies; he replied that he took no offence and that he wished Rossini’s opera well.

Alas, the efforts of the theater management and Rossini to allay public anger over their remake of The Barber of Seville turned out to be futile precautions. Paisiello’s legion of fans – the so-called “paisiellisti” – were not to be forestalled, placated, or headed off at the pass, and they made the first performance of Rossini’s The Barber of Seville (as it is now universally known) on February 20, 1816 a fiasco.

We must remember that for the Italians, opera is a contact sport, and as such the paisiellisti – who considered themselves the home team that opening night – were going to treat Rossini’s opera with the same quiet and that the fans of the future Las Vegas Raiders treat the New England Patriots. The paisiellisti were well organized, and they made the performance a living hell for the rest of the audience and the performers, with their constant jeering, catcalling and whistling. Under such circumstances, it should come as no surprise that there were problems onstage as well. The singer portraying Don Basilio – Zenobio Vitarelli – tripped on a trap door during his initial entrance and did a face plant on the hard, wooden stage. His nose almost certainly broken, he bled like a stuck pig throughout the performance. According to Rossini’s friend and opening-night attendee Alex-Jacob Azevedo:

“The good public, like its ancestors in the Colosseum, viewed that flow of blood with joy. It laughed, it applauded, it demanded a repetition – in a word, made an abominable hubbub.”

And then there was the cat. Again, we’ll let Alex-Jacob Azevedo describe what happened:

“As a climax to the disaster, a cat appeared during the superb finale, mixing among the performers. Figaro (Zamboni) chased it off to one side; it returned from the other and hurled itself into the arms of Bartolo (Botticelli). Marceline (Berta), fearing scratches, evaded with the greatest liveliness the prodigious leaps of the panicked animal; and the charitable audience called out to it, imitated its meowing, and encouraged it to proceed with its improvised role.” 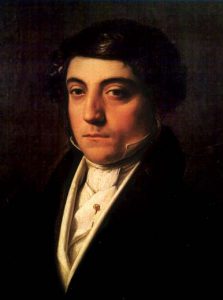 Gioachino Rossini, circa 1815, by Vincenzo Camuccini

After the “performance”, Rossini returned to his hotel room and wrote his mother a surprisingly mature letter, in which he told her about the protest but assured her the music was good and that the second performance – the next night – would be a triumph. And that it was, although Rossini was not there to experience it. Suffering an understandable case of cold feet, he feigned illness and went to bed. He was awakened by a mob carrying torches headed directly for his hotel. Convinced that they were coming for him, Rossini slipped out of his room and hid in the stables behind the hotel. Rossini picks up the story:

“But lo, after a few moments, I hear Manuel Garcia [who played Count Almaviva in the opera] calling me at the top of his voice. ‘Get a move on you; come now; listen to those shouts of bravo, bravissimo Figaro! An unprecedented success! The street is full of people who want to see you!’ ‘Tell them,’ I answered, still heartsick over the previous night, ‘to go f*** themselves, their bravos and all the rest. I’m not coming out of here!’”

Rossini did eventually come out, and his Barber went on to be embraced as a timeless masterwork, a cornerstone of the operatic repertoire. Conversely, the popularity and fame of Paisiello’s Barber diminished in proportion to the rise of Rossini’s. By 1850, Paisiello’s opera was but a footnote, and – fairly or unfairly – it remains so today.