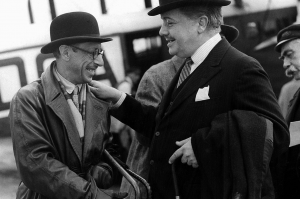 Igor Stravinsky (left) and Serge Diaghilev (right) at the Croydon Airport in London in 1926, 13 years after the premiere of The Rite of Spring.

May 29 was an incredibly rich day in music history. So much to write about, so little space! Check it out. On May 29, 1801 – 216 years ago today – Joseph Haydn’s final masterwork, The Season, received its public premiere at the Redoutensaal: the still-extant great ballroom in the Imperial Palace (Hofburg) in central Vienna. (FYI: Wikipedia gives the date of this premiere as being May 19. Incorrecto!) For our further information, among the audience was Haydn’s one-time “student”, Ludwig van Beethoven.

157 years ago today – on May 29, 1860 – the composer Isaac Albéniz was born in Camprodón, Spain. Albéniz was a brilliant pianist and as evidenced by his suite for piano Iberia (written between 1905-1909), a composer of genius.

Finally – because I cannot not mention it before going on – May 29 marks the 320 anniversary of the assassination of the 44 year-old Italian castrato Giovanni Grossi (known popularly as “Siface”). One of the most famous singers of the entire Baroque era, Siface met his end on May 29, 1697 on the road between Bologna and Ferrara at the hands of “bravi” (muscle) in the pay of a nobleman with whose wife Siface had a … liaison. So much for the erroneous conception that those without balls cannot have a ball. (That was crude; yes, but physiologically accurate).

Let us now focus on what was, along with the Rolling Stones concert at northern California’s Altamont Speedway on December 6, 1969, the most famous riot in Western music history: the first performance of Igor Stravinsky’s The Rite of Spring at Paris’ Théâtre des Champs-Élysées on May 29, 1913, 104 years ago today.

For weeks – months! – before the premiere, word had circulated that a stunning new production by Serge Diaghilev’s Russian Ballet Company (the “Ballet Russes”) would push the very edges of music, dance, stage design, human sexuality and ritual. Of course, this advance word had been circulated by Serge Diaghilev himself, who had a genius for production, publicity, and scandal: in other words, a genius for putting derrieres into seats.

The seat prices had been doubled for the occasion, and an extremely varied audience filled them. The most expensive seats were occupied by social snobs: members of high society dressed to the nines, the men in tail coats and top hats and the women in silk evening dresses and tiaras. But aesthetic snobs were there as well: members of the counter culture in their ordinary clothes and berets, a style of casual headgear that was considered a symbol of revolt against the toppers and tiaras of the beau monde. The counterculture crowd was a readymade cheering section that according to the writer and artist Jean Cocteau “would applaud novelty at random simply to show their contempt for the [rich] people in the boxes.”

The Rite of Spring is set in two large parts. Part One – entitled “The Adoration of the Earth” – consists of seven scenes or “tableaux” which depict various fertility rites, contests, and ceremonies. Part Two – entitled “The Sacrifice” – sees the Chosen Virgin “cut from the herd”, glorified, and, in the end, danced to death. It is, in the words of musicologist Joseph Kerman:

That it is. With its theme of human sacrifice, The Rite of Spring is a singular example of snuff ballet, a ballet for which Stravinsky created music as fittingly primitive, sexually explicit, and brutal as the scenario. It is not music for the weak of heart. Pierre Monteux, who conducted the premiere of The Rite, first heard the score in a tiny rehearsal room in Paris’ Théâtre du Casino. He recalled:

“Stravinsky sat down to play a piano reduction of the score. Before he got very far I was convinced he was raving mad. Heard this way, without the color of the orchestra, the crudity of the rhythm was emphasized, its stark primitiveness underlined. The very walls resounded as Stravinsky pounded away, occasionally stamping his feet and jumping up and down to accentuate the force of the music. Not that it needed much emphasis. My only comment at the end was that such music would surely cause a scandal.”

And that it did. The conflicting reports of what happened at the premiere share one thing in common: the production provoked a volcanic response.

“That the first performance of The Rite was attended by a scandal must be known to everybody. Strange as it may seem, I was unprepared for the explosion myself.

Mild protests against the music could be heard from the very beginning of the performance. Then, when the curtain opened up on the [“Dance of the Adolescents”], the storm broke out. Cries of ‘shut up!’ came from behind me. The uproar continued, and a few minutes later I left the hall in a rage; I have never again been that angry. The music was familiar to me; I loved it, and I could not understand why people who had not yet heard it wanted to protest in advance. I arrived in a fury backstage, where I saw Diaghilev flickering the house lights in a last effort to quiet the hall. For the rest of the performance I stood in the wings behind Nijinsky, holding the tails of his frac [tail coat] while he stood on a chair shouting numbers to the dancers like a coxswain.”

The dancers on stage – observing the screaming and whistling and fisticuffs going on in the audience – must have wondered who exactly were the performers and who were the audience!

The agent provocateur who had engineered all of this was Serge Diaghilev. There was no guarantee that a riot would occur at the first performance of The Rite, so Diaghilev did everything he could to engineer one through advance publicity and ticket distribution, going so far as to give free seats near the high-priced dress circle and boxes to those beret-clad ‘young people’, who in exchange for the tickets were instructed to applaud and cheer no matter what. Thus, when the curtain rose and the dancers appeared, jumping around like grasshoppers on a frying pan and toeing inward rather than out, that segment of the audience that was prepared to be offended by such an attack on the beauty of traditional ballet hissed and booed. The Stravinskyites cheered and applauded. And so the battle was joined, with the audience playing exactly the role that had been scripted for it.

According to Stravinsky, Diaghilev’s only comment after the “riot” was: “that was exactly what I wanted.”