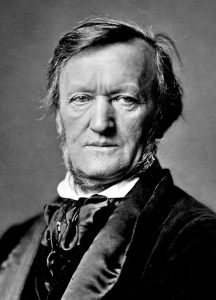 May 22 is a day so rich in music history that choosing a particular event to write about might seem to be a challenge. For example, May 22, 1790 saw the first performance of Mozart’s String Quartets in D, K. 575 and B-flat, K. 589 (the first two of the three so-called “Prussian Quartets”) at his flat in Vienna. May 22, 1874 saw the first performance of Giuseppe Verdi’s in-all-ways extraordinary Requiem, conducted by Verdi himself at the Church of San Marco in Milan. Four years ago today – on May 22, 2013 – the marvelous French composer Henri Dutilleux died in Paris at the age of 97. (All sentient creatures should at very least know and covet Dutilleux’s Cello Concerto, entitled Tout un monde lointain… [A whole distant world…], completed in 1970 for Mstislav Rostropovich.)

But frankly, these events pale in comparison with the BIG event of May 22, and that was the birth in Leipzig on May 22, 1813 – 204 years ago today – of Richard Wagner.

Wagner died at the age of 69 on February 13, 1883: 134 years ago. And yet he and his work continue to inspire a level of debate, adulation and rancor that are, truly, unique in the history of Western music. So before diving into the meat and potatoes of this post, allow me to make the following, factual statement: love him or loath him, Richard Wagner remains one of the greatest composers who ever lived and certainly, without any doubt, the single greatest visionary in the history of Western music.

That factual statement provides the underpinning for the course on Wagner I recorded for The Great Courses in 2010. And yet, that statement did not protect me from the ire – even rage – of any number of self-proclaimed “Wagnerians”. For example, a charmer named Freya Shipley posted this under a YouTube excerpt of the first lecture of the Wagner course:

“Greenberg’s work here is absolutely dismal. Yes, okay, I get it: he’s not a fan. But he’s promised to discuss Wagner’s music, and all he does is make ad hominem attacks on the composer (and not even witty or amusing ones, at that.) He even snipes at those of us who love the music. I’m only speaking of the first lecture of the series, because that’s all I can bear to listen to. If you love Wagner and want to learn more about him, avoid this heavy-handed and uncharismatic oaf.”

Oh dear. An “oaf”? Moi? What would inspire a fellow teacher (yes, I looked her up) to write such delightful things?

This is what I said:

Richard Wagner was a great composer. The magical beauty and dramatic power of his music, combined with the breathtaking grandiosity of his artistic vision together created a “Wagner cult”, one that began in his lifetime and lives on to this day. There are “Wagnerians” out there – Wagnerites, Wagnerfiles, and at its most extreme, Wagnerpaths – who will travel across the country to see a Wagner production, across continents to attend a Ring Cycle, who at least once in their lives will make Hajj to the Wagnerian Mecca that is the northern Bavarian city of Bayreuth; Wagnerians whose knowledge of Wagner singers and recordings is outdone only by their opinions of same.

I know of no other composer in the great history of Western music who has – and continues – to inspire such quasi-religious adulation as Richard Wagner. Like Shakespeare before him and J. R. R. Tolkien and George Lucas after him, Wagner created an alternative universe that is, for some, an ineluctable part of their lives.

And yet, for every reverential Wagnerfreak, there is an equally adamant Wagnerphobe, someone who is disgusted by the “Wagner cult” and revolted by the man: by his behavior and his “racial theories” and his belief in the inherent superiority of all things “German”.

To the latter, a telling Wagner quote:

“I am the most German of beings. I am the German spirit. Consider the incomparable magic of my works.”

Sadly, the more we get to know Richard Wagner the person, the less we like him. Harold Schonberg, for many years the chief music critic for the New York Times and a great fan of Wagner’s music was blunt in his appraisal of Wagner, the “man”:

“As a human being, he was frightening. Amoral, hedonistic, selfish, virulently racist, arrogant, filled with gospels of the superman (the superman naturally being Wagner) and the superiority of the German race, he stands for all that is unpleasant in human character.”

Wagner’s monumental ego (or inferiority complex, take your pick) passed into megalomania. The slightest degree of contradiction would drive him into a rage and out of a room. There was no such thing as a “conversation” with Wagner; rather, he “held court” and pontificated for hours on end. We read that these monologues – which stretched far into the night – often ran for six to eight hours in length.

Wagner believed that his artistic muse required the creature comforts of a Saudi Prince and that his “genius” entitled him to anything he wanted. He was quite up front about it, declaring in 1864:

“I am a different kind of organism. I have hyper-sensitive nerves. I must have beauty, splendor, and light. The world ought to give me what I need. Is it such a shocking demand, if I believe that I am due the luxury I enjoy?!”

Emma Herwegh, the wife of Wagner’s friend the poet Georg Herwegh, had no patience for Wagner, who she wrote-off as:

“This pocket-size edition of a man, this folio of vanity, heartlessness and egoism.”

But Heinrich Porges, a German-Jewish writer and choral conductor who worked with Wagner understood Wagner. He wrote:

“Such demonic personalities cannot be judged by ordinary standards. They are egoists of the first order, and must be so, or they could never fulfill their mission.”

Wagner’s prodigious level of material self-indulgence meant that he was perpetually in debt and often on the run from his creditors, even as he did everything in his power to beg, wheedle, and demand money from anyone who’d listen. In 1853 – at the age of forty – he tried to hit his own niece Johanna for a “loan” of 1000 thalers. Johanna’s father – Wagner’s brother Albert – was furious:

“I am accustomed to seeing you respect people if and as long as they can be of use to you. A person no longer exists for you when their usefulness is over. You know nothing of gratitude for the past: all that is merely an infernal obligation! It has always been so. Whilst I greatly love and esteem your talent, it is just the opposite with regards to your character.”

Yes; that was written by Wagner’s brother!

To the point: rightly or wrongly, what we know about Wagner the man can easily affect our feelings about his music. Now, many well-meaning observers would argue – the philosopher Friedrich Nietzsche among them – that Wagner “the man” and Wagner’s “music” should be considered as two separate entities; hey, look, Ty Cobb might have been a first-class jerk, but that doesn’t change the fact that he had 4189 hits and career batting average of .367, the highest ever.

However, in reality, we cannot separate Wagner the “man” from his “music”. According to Wagner himself, his life and work constitute a single, indivisible entity. More importantly, we don’t want to separate the man from his music. Wagner’s attitudes and beliefs – controversial (even loathsome) though they might be – lie at the heart of his mature work.

Wagner’s fascination with myth and make-believe applied as much to his everyday life as it did to the plot lines of his productions. Writing in his essay “Religion and Art”, Wagner warns his readers not to believe the “lies of reality” as taught by “historians”, because the great “truths” can only be revealed by “poet-priests” like himself. Bearing this in mind, Wagner’s autobiography – that in my edition runs to over 900 pages – must be approached gingerly if one is looking for facts, particularly about Wagner’s early life. Wagner wanted to appear larger than life and demanded to be perceived in paradigmatic Romantic terms: as a creative hero, as a superman, as a god. Wagner’s “autobiography” is but another of Wagner’s “literary works”, with large portions based on imagined events.

Unlike Mozart, whose music creates an ideal world far beyond the mundane realities of the every day; or Beethoven, whose expressively high-octane works universalized the personal issues that inspired them; Wagner’s writings and stage works are an autobiographical outgrowth of the man himself. Wagner’s stage works are at their core autobiographies, and his male title characters – Rienzi, Tannhäuser, Lohengrin, Tristan, the Mastersinger, Siegfried, and Parsifal – are but thinly veiled projections of Wagner himself.

In truth, we cannot separate Wagner the “man” from Wagner the “artist”; they are one and the same.

So I would say to the Wagner lovers and haters alike: don’t blame the messenger, meaning yours truly. Wagner’s stage works are magnificent and I cannot imagine life without them (to my mind, my life without Tristan und Isolde would not be livable). Yet the subject matter of those same stage works can be ludicrous and even repugnant (Parsifal, for example), and they were created by someone with a malignant personality.

Let’s deal with it because – and of this I can assure you – Wagner’s stage works are worth the trouble.