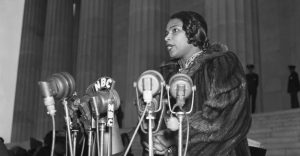 On April 9, 1939 – 79 years ago today – the American contralto Marian Anderson performed before an audience of over 75,000 people on the National Mall in Washington D.C. It was one of the most important and inspirational concerts ever to take place on American soil; a concert that to this day has the power to bring us to tears when we consider the circumstances under which it took place.

Marian Anderson was born in Philadelphia on February 27, 1897, the granddaughter of slaves. Her prodigious talent as a singer revealed itself early, and at the age of six she joined the choir of the Union Baptist Church in South Philly. Even as she developed as a singer, poverty precluded her from attending high school; she didn’t graduate from South Philadelphia High School until 1921, at the age of 24.

On graduating – and with financial backing from Philadelphia’s Black American community – she attempted to apply to the Philadelphia Music Academy (today the University of the Arts). But she was rejected out-of-hand because she was black, being told by an admissions officer that “we don’t take colored.”

Undeterred, she continued to study privately thanks to the continued support of her community until she got her first big break: she won first prize in a singing competition conducted by the New York Philharmonic, with which she performed in concert on August 26, 1925. And while audiences and critics alike were enthralled with her, racial prejudice prevented her career from taking off as it should have in the United States. 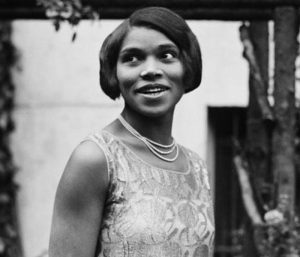 So Anderson upped and left for Europe where she became one of the most famous, beloved, and sought-after singers of her time. It was while performing in Salzburg in 1935 that Arturo Toscanini heard her and declared that she had a voice “heard once in a hundred years”. (It was also in Europe that she met the Finnish pianist Kosti Vehanen, who became her vocal coach and accompanist; it was Vehanen who shared the stage with Anderson at the Lincoln Memorial 79 years ago today).

Marian Anderson made her triumphant return to the United States in the late 1930s, giving upwards of 70 recitals a years. Sadly – painfully, pathetically – her fame and the adoration with which she was held did not protect her from the endemic discrimination of the time. She still could not stay in certain hotels or eat in certain restaurants. (Albert Einstein – utterly disgusted by such prejudice – opened his home to Anderson on numerous occasions, the first being in 1937 when she was denied a hotel room while performing at Princeton University!)

Anderson was invited to sing on a concert series at Howard University, a historically black university in Washington, D.C. Because of Anderson’s fame and popularity, a venue had to be found large enough to accommodate an anticipated overflow audience. So the organizers approached the directors of Constitution Hall, a nearly 4000-seat theater located at 1776 D Street NW, near the White House. But Constitution Hall – owned by the Daughters of the American Revolution (DAR) – rejected the request out of hand because Anderson was black, and every contract issued by the DAR for Constitution Hall contained a clause stipulating that only white artists could perform there.

(Anderson’s agent, the impresario Sol Hurok, then tried to find a high school auditorium for the concert, but the only one big enough was located in a white high school; the public schools in D.C. were segregated at the time. The District of Columbia Board of Education refused Anderson’s request to perform there as well.) 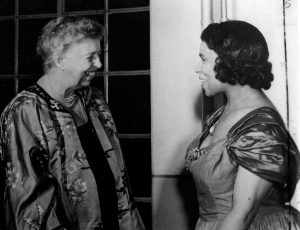 “I am in complete disagreement with the attitude taken in refusing Constitution Hall to a great artist. You had an opportunity to lead in an enlightened way and it seems to me that your organization has failed.”

Eleanor Roosevelt on the warpath was a force of nature, and Marian Anderson’s treatment by the DAR (and the District of Columbia Board of Education) put her squarely on the warpath. She informed her husband, President Franklin Delano Roosevelt, that a suitable venue for Anderson had to be found. Understanding full well the symbolism involved, President Roosevelt told the Secretary of the Interior Harold L. Ickes to organize an out-of-doors performance from the steps of the Lincoln Memorial. 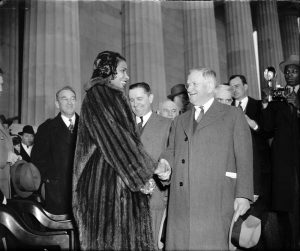 79 years ago today, Secretary Ickes led Anderson onto the temporary stage. Standing in front of a bank of microphones, Ickes introduced her with these words:

“In this great auditorium under the sky, all of us are free. Genius, like justice, is blind. Genius draws no color lines.”

Over 75,000 people jammed the National Mall in front of the Lincoln Memorial; the crowd stretched all the way to the Washington Monument. Further untold millions listened to the concert on the radio. Anderson, 42 years old and facing what was almost certainly the largest concert audience ever up to that time, later admitted to having been terrified:

“I could not run away from this situation. If I had anything to offer, I would have to do so now.”

What she offered made history. She began with a stately and deeply felt rendition of My Country ‘Tis of Thee (see video below). She followed with an aria from Donizetti’s opera from La favorite, then Franz Schubert’s Ave Maria, and concluded with three spirituals: Gospel Train, Trampin’ and My Soul is Anchored in the Lord.

It was a cloudy, blustery, Easter Sunday, though we are told that the sun came out the moment Anderson began to sing. As well it should.

Under the heading of better-a-little-late-than-never: the DAR, facing what can only be described as the grandmother of all public relations disasters, quickly reversed course and very publicly apologized to Anderson. Anderson – bless her – accepted the apology with characteristic grace and went on to sing in Constitution Hall many times. In 1992, the DAR awarded the 95 year-old Marian the Centennial Medallion, an honor bestowed on women for outstanding service to the United States.