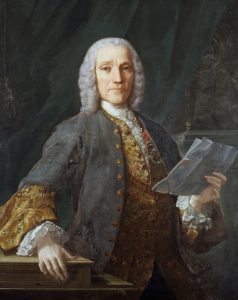 We mark the death of the composer Domenico Scarlatti 261 years ago today, on July 23, 1757 in the Spanish capital of Madrid.

The year 1685 was something of an annus mirabilis – a “miraculous year” – in the history of Western music as it saw the births of three of the greatest composers ever to grace our planet. On February 23, 1685, George Frederick Handel was born in the central German city of Halle. Thirty-six days later, on March 31, Johann Sebastian Bach was born some 60 miles away, in the central German city of Eisenach. Just under seven months after that, on October 26, Domenico Scarlatti was born in the Italian city of Naples. What a year!

Some would take me to task for lumping Scarlatti together with Handel and Bach. (And in truth, we must be careful about lumping anyone together with Sebastian Bach, Handel included.) But having said that, we are not going to diminish one composer’s greatness by cudgeling him with that of another, because any way we spell it, Domenico Scarlatti was, bless him, a great composer.

We would further observe that musically, Scarlatti did something that neither Bach nor Handel did: neither Bach (who died in 1750) nor Handel (who died in 1759) transcended the musical syntax of the “High (or late) Baroque”, irksome though it might be to employ such a period designation. Whatever; Scarlatti – who died in 1757 – did indeed transcend stylistically the High Baroque, and his music is a brilliant example of a new, more populist compositional style that emerged in his hometown of Naples in the 1720s and 1730s, a style that would eventually come to be known as the “Classical style.”

Maestro Scarlatti came by his musical bona fides honestly. He was the sixth of ten children born to the composer and teacher Pietro Alessandro Gaspare Scarlatti (1660-1725). The elder Scarlatti is considered to be the padrino – the godfather – of Neapolitan (meaning Naples-based) opera. Paul Henry Lang, writing in his magisterial Music in Western Civilization sums up Alessandro Scarlatti’s importance this way:

“The great personality who virtually made Naples the Mecca of musicians was Alessandro Scarlatti. He composed more than 100 operas; the number of his oratorios is approximately 150, while the cantatas (600) and various types of church music, together with his keyboard music, complete a truly impressive oeuvre. This astounding productivity does not mean superficiality or patchwork, for his compositions show a mastery of workmanship and an abundance of original musical ideas. In his dramatic works he professed an unconditional worship of the beauty of melody [and] a complete abandonment to the sensuous charm of the singing voice. Modern Italian opera begins with [Alessandro] Scarlatti. Handel, who met him in 1708, remained a devoted admirer of the Neapolitan master throughout his life, studying and imitating his works with loving care.”

But Handel was not Alessandro Scarlatti’s greatest disciple. That would, of course, be Alessandro’s son Domenico. It wasn’t that Alessandro took Domenico’s music education into his own hands in the manner that Leopold Mozart did with his son Wolfgang 75 years later (while Alessandro did oversee Domenico’s instruction, it was a music education provided principally by others). No, Alessandro’s greatest gift to his son was raising him in the immersive, theatrical musical environment of a successful opera composer. Young Domenico’s music education was of the most practical sort: music was the family business and he was expected to contribute. As he got older he performed all sorts of jobs for his father: he arranged and copied music; he tuned instruments; he accompanied singers at rehearsals; he assisted his father in whatever was necessary during productions, acted as a gopher; we can imagine him making the coffee, corking the wine; if he could have, he’d likely have shaken the martinis. Writes Ralph Kirkpatrick in his biography of Domenico Scarlatti:

“He must have absorbed from the surrounding musical activity as naturally as he breathed.”

On September 13, 1701 the not quite 16 year-old Domenico Scarlatti was appointed composer and organist of the royal chapel in the Royal Palace of Naples. From there his professional life took him to Venice, Rome, and finally to the Iberian peninsula, where he taught and composed for various royal families in Lisbon, Seville and Madrid.

(A great story. Scarlatti might have met Handel in Venice sometime during the winter of 1707-1708. However, we know for sure that they met in Rome in early 1709, when they were both in their 24th year. John Mainwaring, Handel’s first biographer – his biography of Handel was publish in 1760, just one year after Handel’s death – describes what happened:

“As [Scarlatti] was an exquisite player on the harpsichord, the Cardinal [Ottoboni] was resolved to bring him and Handel together for a trial of skill; it has been said that some gave preference to Scarlatti. However, when they came to the organ there was not the least pretense for doubting to which of them it belonged. Scarlatti declared the superiority of his antagonist, and owned that till he had heard him [Handel] upon this instrument, he had no conception of its powers. Handel used to speak of [Scarlatti] with great satisfaction, for besides [Scarlatti’s] great talents as an artist, he had the sweetest temper, and the genteelest behavior. On the other hand Scarlatti, as oft as he was admired, would mention Handel and cross himself in token of veneration.”)

Domenico Scarlatti composed operas, ballets, and various other works. But pride of place in his output must be given to his 555 sonatas, which together constitute one of the greatest sets of compositions written by anyone, anywhere, and at any time. (Please do not expect a measured critical tone from me regarding Scarlatti’s keyboard sonatas. Along with Ann-Margret, I have loved them since I was a child and my affection sees no sign of waning.)

The sonatas are all one movement in length and are primarily cast in “binary form”, meaning that they consist of two parts, each of which is immediately repeated. Almost all of them were composed for harpsichord or piano; four of them are for organ and a few for chamber groups.

Where to start? The sheer imagination exhibited in these sonatas is breathtaking. Thematic melodies stand out like etched crystal; the counterpoint is brilliant. Scarlatti’s use of dissonance is often shocking, as is his proclivity to modulate to distant and unexpected key areas. Rhythmically, these sonatas are, collectively, among the most viscerally exciting music I have ever heard. And the range and nuance of moods they explore! It’s no wonder that Scarlatti’s sonatas were revered by Frédéric Chopin, Franz Liszt, Johannes Brahms, Béla Bartók, and Dmitri Shostakovich.

There are many wonderful recordings of the sonatas, on both harpsichord and piano. I prefer the piano (an explanation of why will just get me into trouble with my harpsichord-playing friends, so let’s just leave it at that). There is a fascinating recording by Vladimir Horowitz, who plays the sonatas with a brilliance and bravura that some auditors find way too “romantic.” Well, pardon-moi, but to hell with those auditors; no one criticizes Dads-Vlads in my presence. Andras Schiff has made a lovely recording as well. But my favorite recordings of Scarlatti’s sonatas – for their taste, balance, clarity and nuance – are the wonderful Angela Hewitt’s, on Hyperion. Check them out!

For lots more on the stylistic transition from the High Baroque to the Classical era, I would direct your attention to my Great Courses survey, “How to Listen to and Understand Great Music”, which can be downloaded on sale now.