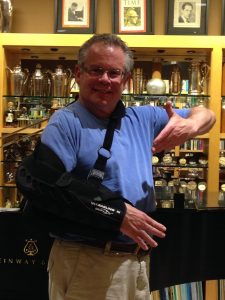 A photo taken of my sinful right shoulder by our house paprazza, my nine year-old daughter Lily.

A drum roll (okay; perhaps just an onion roll): announcing the upcoming releases of my latest Great Courses survey and my first webcast courses, what I will now refer to as “webcourses”.

It’s been a year since I announced my intention to begin self-publishing such webcourses; I have now completed writing two of them. The first is “Mozart in Vienna”, a 16-part course that deals with the last 10 years of Mozart’s tragically short life, from 1781 to 1791. Featuring Mozart’s chamber music for strings, the webcourse focuses on Mozart’s day-to-day life and his amazing compositional development during his years as a resident of Vienna. While there is some overlap with the repertoire covered in my The Great Courses/Teaching Company course “The Chamber Music of Mozart” (recorded back in 2004), “Mozart in Vienna” is considerably less technical than the aforementioned Great Courses survey and explores many works I’ve never before examined, including Mozart’s last four string quartets: the so-called “Hoffmeister” Quartet and the three “Prussian” Quartets.

The second webcourse is one I’ve wanted to create for many, many years: an 18-part survey entitled “The Music of the Twentieth Century”. The “music” to which the title refers is primarily concert music, though the course does briefly touch on jazz and rock ‘n’ roll. Taught from the perspective of a practicing, academically trained composer (yours truly), this course creates a musical, historical, and aesthetic context for the principal musical trends and “isms” that characterized what was arguably the wackiest 100-year span in human history. Unlike “Mozart in Vienna”, “The Music of the Twentieth Century” does not feature live musical excerpts. Rather, the talks are keyed to recordings available free-of-charge on YouTube.

I had fully expected to record these two webcourses in June, edit them in July, and have them out by September 1. Unfortunately, what should have been routine shoulder surgery on May 18 got in the way: a simple rotator cuff reconnection became as well a bicipital tendon reconnection/reconstruction and a bone graft. (When my orthopedic surgeon tried to put anchors into my humerus bone, the bone just dissolved, thus giving lie to my conceit that I had a good sense of humerus. The bonehead – as my brother the radiologist tells me orthopedic surgeons are known in the trade – consequently packed me up with cadaver bone. He later told me told me that my wrecked shoulder was the result of “the sins of my youth.” Had I known in my youth that I was sinning, I would – like Miss Jones of “The Devil in Miss Jones” fame – actually done something worthy of being called a “sin”.) So here I sit, 44 days later, still wearing a shoulder harness/brace/sling; a one-armed bandit desperate to shower, sleep on my side, play my piano and record my webcourses. The sling will begin to come off on July 14; physical therapy will commence; and I should (should!) be good to start recording on August 1. With some luck then, the courses will go live between September 15 and October 1.

The webcourses will be downloadable in both audio and video formats. They will be fairly inexpensive; about the cost of a Great Courses survey on Audible. Pending a successful rollout, I will make more of them. Next on tap would be a survey of the life and music of Chopin (with musical excerpts).

My most recent The Great Courses survey, entitled “Music as a Mirror of History”, will be released in three weeks, on July 22. Nearly two years in the writing, recording, and post-production, I’ve no doubt that it’s going to be killer-great (pardon my confidence here, but I do believe it’s the best work I’ve ever done for The Great Courses). Be assured that I will write much more about “Music as a Mirror of History” in the days ahead.

« Celebrating With Eighth Blackbird
On The Torch Live with Ed Leon »
Categories : The Great Courses, Webcourses
Tags : Mozart in Vienna, Music as a Mirror of History, news, The Great Chourses, The Music of the Twentieth Century