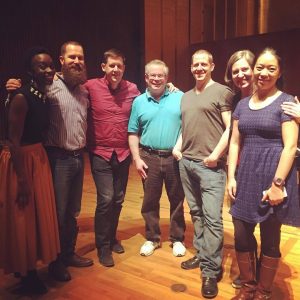 Yours truly with Eighth Blackbird yesterday on the stage of Berkeley’s Hertz Hall. (FYI: I’m not really that short. They are all really tall!)

The amazing Chicago-based new music group eighth blackbird played a concert in Berkeley’s Hertz Hall yesterday evening (Sunday, February 14th). At the invitation of the group’s Managing Director Peter McDowell, I sat in on their rehearsal yesterday afternoon. The group is phenomenal, and the rehearsal had, in fact, the character of a high-end performance. I was privileged – along with Peter – to be one of the two people in the house to hear the rehearsal.

Following the concert, two of the six members of Eighth Blackbird headed home to Chicago, while the other four headed down to Los Angeles. They were up for a Grammy award today, and figured to be in LA today for the awards ceremony. Well DANG: they did indeed win that Grammy, and it couldn’t have happened to a better organization. Let us raise a glass to this wonderful bunch of musicians – and indeed, to the entire new music performing community – that keep new music and composers like myself alive and well.

I will be forgiven a brief but heartfelt call out. There is a special place in heaven reserved for such new music specialists as well as for those many, MANY extraordinary performers who play their symphony and opera gigs on Thursdays through Sundays and then perform new music on Mondays and Tuesdays. These good people are paid next-to-nothing for their extraordinary work performing the music of living composers, and still they deliver – day after day, month after month, year after year – the most amazing performances, performances that make us – the composer-beneficiaries of their artistic largesse – virtually weep with gratitude. Heaven: they have a special place. From my lips to god’s ears. Yes.