We are all Parisians 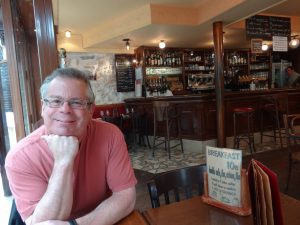 This photo was taken by my wife Nanci in a café on the Rue Mouffetard back in May; the rare smile on my face a reflection of the simple pleasure I felt sitting in a café in the fifth arrondissement

It has been said that “Italy gave us the Renaissance and France just about everything else”. It’s a statement that the opera composer Giuseppe Verdi – arch Italian nationalist that he was – would have agreed with entirely. Over the course of his career Verdi lived in Paris for a number of years and profited mightily from the Parisian operatic establishment. And while this straight-shooting, matter-of-fact Italian from the Po Valley was often at odds with his French hosts (“I have lived long enough in France to understand how the French make themselves insufferable by their insolence”), he also understood that Italy and France needed to stand side-by-side in the face of German aggression (“But whoever considers himself to be truly Italian must be above such [Gallic] pinpricks”).

Verdi watched the progress of the war between France and Prussia – the Franco-Prussian War of 1870-71 – with undisguised horror. In a letter written to his friend, the Countess Clarina Maffei on September 30, 1870, immediately after the French defeat at Sedan, Verdi said that it was hard to adequately describe:

“The desolation in my heart over France. France has given liberty and civilization to the modern world. Let us not deceive ourselves. If she falls, our civilization will fall.”

There’s a message here, and I trust I will be forgiven a rare bit of non-musical editorializing. Like Verdi, I would respectfully suggest that we keep in mind that much of the best of what we are today – as a civilization – we owe to France.

Now. Many Americans remember the year 1917 as the year the United States entered the First World War and “bailed them Frenchies out”. In the process, those individuals conveniently forget that for three years, in defending Western Europe, the French and the British had been bled dry, fighting off an enemy – Germany – that had over twice the population of France. That war devastated most of Northern France and claimed the lives of more than 1,721,000 French combatants, roughly the same number of deaths as in all the foreign wars fought by the United States – from the Revolution through Iraq – combined, times THREE.

We recall the year 1944 as the year that the United States (and the British, and the Canadians, and the Australians, New Zealanders, Free French, Free Polish, and so forth) invaded Europe and liberated France. Many Americans continue to believe that for this military largesse, the French nation “owes” the United States an eternal debt of gratitude. In the process, these folks forget that in 1781 it was a French fleet under the command of Admiral de Grasse that blockaded Chesapeake Bay, defeated the British naval forces under Admiral Graves, and thus allowed a Franco-American army under the joint command of General George Washington and Marshall Jean Baptiste Donatien de Vimeur, Count of Rochambeau to defeat Cornwallis at Yorktown a month later and, in doing so, end the Revolutionary war. 1944, 1781: I’d say we were even.

We should all remember the particularly tawdry national episode in 2003 when France, in its wisdom, refused to support America’s ill-advised invasion of Iraq. The White House and conservative leadership were livid with France’s “duplicity and lack of vision” and encouraged the dumping of French wine and the renaming of pommes frites as “freedom fries.”

That was just embarrassing.

To the facts. The French have created a civilization – a standard for food and drink, urban design, fashion, for LIFE – that remains the envy of the planet. France gave us the Enlightenment, the intellectual and political substance of which formed the indispensable underpinning of the Declaration of Independence, the American Revolution, the Bill of Rights and the Constitution; in a phrase, of American Democracy.

The English writer Charles Morgan wrote: “France is an idea necessary for civilization.” Morgan is correct. And if the French still feel that they’ve some right to assert their national will in a global community that they – as much as anyone else – helped to civilize, that’s their right as well.

To top it all off, the French have created a capital city – Paris – that is, simply, by whatever standard we choose to measure cities, without equal. Period.

The feral but cunning “evil doers” who would (if they could) destroy Western civilization have come to understand all of this. The 9/11 attacks hit American capitalism (the World Trade Center) and the American military (the Pentagon). But because of what Paris represents, the 2015 attacks – on Charlie Hebdo on January 7; the Porte de Vincennes siege on January 9; and the November 13 atrocities – are assaults on civilization itself, on every one of us who holds dear the Enlightenment tenets of individual freedom and tolerance.

I have been lucky enough to visit Paris many times. Frankly, I wish I could be in Paris now, as I think many of us do. For me the issue is one of solidarity: a desire to stand with the citizens of a city that represents so much of the best of who we are, and as a result has become a target for some of the worst of who we are. I know it sounds hokey (and I am generally allergic to hoke), but for the foreseeable future, nous sommes tous Parisiens: “we are all Parisians”.