The Ring in Berlin – Part Two 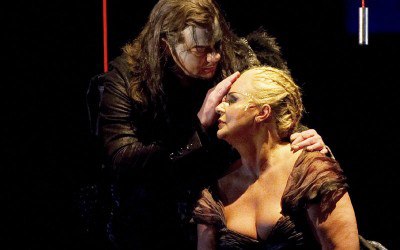 The permanent home of the Berlin State Theater (the “Staatsoper”) is a magnificent, traditionally arrayed 1300-seat theater on the Unter den Linden, Berlin’s equivalent to Paris’ Champs Elysées and New York’s Fifth Avenue. The theater has been closed for renovations since 2010, and will likely remain closed until 2015. Thus, performances have been transferred across town to the Schiller Theater, a considerably smaller and more modern theater (with big, cushy, movie theater-like seats set – like Wagner’s own theater in Bayreuth – at a fairly steep pitch).

It was a fabulous place to see and hear The Ring.

We sat in row six, and the sound in this small, wood-paneled theater was truly awesome. The huge orchestra conducted by Daniel Barenboim was kidney-rattlingly brilliant, and offered up pretty much the best stretch of orchestral playing I have ever heard. The singers were likewise wonderful, from top-to-bottom. To single out just a few: René Pape was a brooding and intense Wotan; the ageless (57 year-old) Waltraud Meier sang Sieglinde; and the Swedish soprano Iréne Theorin played Brünnhilde. And what a Brünnhilde she was! Diva Theorin is as big as a Schloss: with a front-end like twin locomotives, arms and back like Schwarzenegger, and voice that could power a medium-to-large sized city, she was every inch (and she has A LOT of inches) the stereotypical Brünnhilde.

All good, ja? Sadly, no, because the stage production itself, created by the Belgian designer/sadist Guy Cassiers, was a stinker of the first order. The generous thing would be to let the curtain of charity fall on this ludicrous production, but that would deny me the opportunity to be scathing and you the opportunity to enjoy something of the disaster without actually having had to sit through it. So with the understanding that I can hardly to skim the surface of this wreck, I’d mention just a few of its absurdities.

Dancers. The productions were filled with a company of gyrating, twitching dancers who portrayed, among other things, dragons, a mouse, chains, and Hostess Twinkies. They added virtually nothing to the productions except distraction and confusion.

Prom dresses. The Valkyries – the GI Jane paramilitaries employed by their father Wotan to collect dead bodies from battlefields – were dressed in poufy PROM DRESSES; I kid you not. Brünnhilde’s prom dress was particularly long, and she spent three music dramas trying not to trip on it. Stupid.

The “ring”. The ring of power was depicted not as a “ring” but rather as a Michael Jackson-styled sequined silver glove (not even gold; go figure). The “wearers” of this ring did not wear it on their hands but rather, stuck it to their sleeves via Velcro. Whenever someone removed the “ring” from his sleeve, the familiar ripping sound of disconnecting Velcro filled the theater. Unbelievably stupid.

Video projections. Video projections – large and small – provided a continuous and incredibly distracting backdrop/counterpoint to the action on stage. Among the non-stop projections were huge, utterly random images of dead bodies and severed limbs; of ghoulish women sticking out their (excessively long) tongues; of descending green letters and numbers (a la the movie The Matrix); and god knows what else: stuff that did nothing to complement or intensify the music and the drama (which is what The Ring is all about) but collectively offered only a monumental distraction. It was as if the designer Guy Cassiers was yelling petulantly at the audiences, “don’t listen to the singers and the orchestra, LOOK AT ME!!!!”

A good question: why does Daniel Barenboim put up with this production, which was created back in 2011? He has been the music director of the Staatsoper for 21 years and was elected by the musicians of the orchestra “Honorary Conductor for Life” in 2006. Surely Barenboim could insist that this catastrophe be replaced, yes? But it was Barenboim who brought in Cassiers in the first place and gave him carte blanche to create what became a phenomenally expensive production. I have been told that much as Barenboim would like to see the production go, he is too deeply invested in it and would lose too much face by demanding its replacement. In a nutshell, if the production is a monster, it’s Barenboim’s monster, and thus, for the foreseeable future, the Staasoper and its audience is going to have to live with it. Molto stupido.