The Ring in Berlin Part One 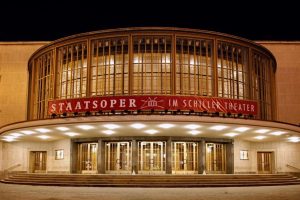 Safely (and warmly) ensconced back in northern California, I will offer over the next few days a report of what was, by any measure, an extraordinary Ring cycle in Berlin.

I would begin with the bad news.

The supertitles were all in German! Arghh!!! Of all the nerve! Granted, I’ll be the first to admit that here in the U.S. of A., opera supertitles are provided only in English. But then, the operas being performed are not in English, so at least such American supertitles do indeed offer a translation from one language to another. But no such translations were made available in Berlin (and I am told this is standard-operating procedure across Germany where supertitles, if they are provided at all, are always in German); either you speak/read German or you are seriously out of luck.

Now. The Ring-o-philes among us might claim that any Ring-o-holic should be familiar enough with the story as to not require the sort of translational crutch supertitles provide. Yes, yes: without intending to sound overly defensive, I would I concede that I am familiar with the story of The Ring. And yes, yes: my German is passable, sort of. But still, the fact remains that as the overwhelming bulk of the four music dramas that make up The Ring consists of extremely wordy conversations that go on – and on – for 15, 20, and even 30 minutes and more, a little translational help would have been NICE.

I know; I can see the tears of sympathy running down cheeks.

Having got that out of my system, I can finally get on with the actual content of the music dramas themselves: the singing; the orchestral playing, and the productions.