The Ring in Berlin – Part Three 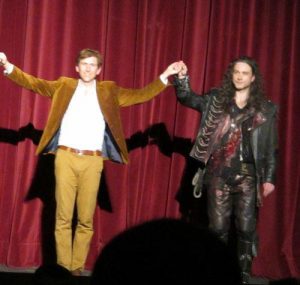 The third installment of our Berlin Ring cycle – Siegfried – took place on Sunday, April 7 (by total coincidence, “International Holocaust Remembrance Day”). The curtain was particularly early that day – 4 PM – presumably to allow everyone to get home for a workday on the morrow.

It would appear that everyone was aware of the early curtain time except the Canadian singer Lance Ryan, who was scheduled to sing Siegfried.

I heard Lance Ryan sing the role of Siegfried in this exact production at La Scala in Milan in November of 2012. He was brilliant, and the La Scala audience – no easy sell when it comes to Wagner – gave him an appropriate ovation.

There were no such ovations for Mr. Ryan on Sunday, April 7, at least not at first, as he apparently thought the show was to begin at 6 PM.

So it was that twenty minutes before curtain time there was no Siegfried in the house. We – the audience – calmly took our seats, unaware of the panic going on backstage.

With the clock thus ticking, Daniel Barenboim made a phone call to the young Austrian tenor Andreas Schager who had, a few weeks before, sung the role of Siegfried at Baden. Schager was in town because he was scheduled to sing the role of Tamino in Mozart’s The Magic Flute, under the baton of Simon Rattle, that very evening starting at 6 PM.

The audience discovered what was going on when a clearly embarrassed Staatsoper spokesperson tiptoed out from behind the curtain. “Lance Ryan is not in the house”, he said, “and we don’t know where he is.” We were then informed that Andreas Schager – who was on his way – would sing the first act. However, as Schager was unfamiliar with the production, we were told that he would sing standing at stage left while an assistant director – dressed and bewigged as Siegfried (see below) – mimed the part from the stage. A few minutes later Andreas Schager – wearing street clothes (again, see below) – came on stage with a music stand and a vocal score, set himself up to the side, and got ready to sing one of the most difficult parts in the repertoire without rehearsal or warm-up.

The performance began. The assistant director “playing” Siegfried on stage was clearly terrified. The very last place he expected to be when he came to work that day was ON STAGE DURING A PERFORMANCE DRESSED AS SIEGFRIED, attempting – most unsuccessfully – to lip-sync the part to Schager’s singing. (His efforts reminded me of those low-end, Hong Kong-made Kung-Foo movies in which mouths are wildly out of sync with the dubbed English dialogue.) Our ersatz Siegfried’s deer-in-the-headlights body language quickly made him unwatchable. Not so Mr. Schager, who despite being tethered to a music stand on the side of the stage was having a grand old time singing Siegfried. And sing like an angel he did: all eyes were on him. When the act ended the audience rightly went nuts, as did Barenboim, who personally escorted Schager back on stage for an extra curtain call before wishing him guten Abend and sending him off to play Tamino across town.

End of story? Not yet, because there were still two more acts to be played and no Siegfried to play them. Finally, toward the end of the 35-minute intermission, Lance Ryan strolled into the theater, apparently unaware of what had been going on for the last two hours. We do not know what was said to him, but we can imagine the freak-out he must have experienced when he found out what had happened: this is, after all, every performer’s worst nightmare. So he suited up and hit the stage for act two.

He did not sing well. (One of our group wittily remarked after the second act that she now knew why Ryan was so late, as “he was looking for his voice.”) If all of this had occurred at La Scala in Milan, the audience would have booed him off the stage (which, given his body language, I believe he half expected). But we were in Berlin, at the Staatsoper, where he was politely permitted to continue. Ryan repaid the audience’s civility with a brilliant third act; the concluding love duet with Brünnhilde was particularly sublime.

When he came out for his bows, Ryan sheepishly lowered his head and put his hands over his face in apology. It was an endearing moment, and the audience roared its forgiveness.

Talk about a drama-within-a-drama. Rarely will Richard Wagner be upstaged, but the story line for this night was the tale of THREE Siegfrieds.