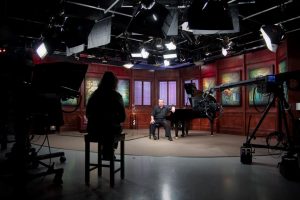 A most interesting article on The Great Courses (TGC) appeared in the New York Times on Saturday. TGC has been featured in newspaper articles before: scads of articles, in fact, over the last 20-plus years. But those articles (at least the ones I’m aware of and I am aware of most of them) have always focused on the content of TGC offerings: that they are academic courses offered up on audio/video media. This article, written by the Times’ TV critic Neil Genzlinger, is different. It focuses on TGC as a video production company and on TGC courses as slick, professional, high-end television programs.

My goodness, how times have changed.

Long-time readers of this blog will recall my descriptions of TGC in its early days. I would rehash a bit of that if only to highlight the incredible evolution of the company from a startup to the polished gem it is today.

I made my first course back in May of 1993: the first edition of “How to Listen to and Understand Great Music”. We had no “set”; I worked in front of a blue screen (or a “traveling matte”). The halogen lighting created an unbelievable amount of heat and glare. The stage was only about 6 feet deep but about 20 feet wide. With my sheaf of yellow note paper clutched in my left hand, I roamed back-and-forth, in constant motion, teaching exactly the way I did in the classroom. I made no concessions to the medium; to tell the truth, it never occurred to me or my director at the time that we should do anything but reproduce what I did in the classroom. (My constant lateral movement did, however, cause great consternation among the camera people, who were accustomed to filming stationary pundits at CNN and gasbags at C-span. One of our camera-dudes, a bearded stoner who will remain nameless kept telling me “Man . . . I cannot follow you, man. Please, man, please!” He was a good guy though, and offered to “take my edge off” by lighting me up during our breaks. I wisely declined.)

We worked with a studio audience in those days: mostly retirees who were free to attend such recording sessions, many of whom fell asleep in their chairs after lunch or jingled change in their pockets or whose hearing aids started screaming sounds that they could not hear but I most certainly did. Most distracting were the white Styrofoam coffee cups; in the darkened studio their constant (if irregular) up-and-down motion reminded me of the “bouncing ball” from the musical cartoons of the 1930s, ‘40s, and ‘50s.
I could go on (and I will, at some other time), though the point is made: in its earliest days TGC was simply recording more-or-less what you would hear in a classroom or lecture hall. I am reminded of the early days of TV, during which pre-existing modes of entertainment – the variety show, theatrical productions, puppet shows – were simply filmed and broadcast. In its earliest permutation, the video medium did not create a new paradigm so much as record old ones. But this changed soon enough, and the same is true for TGC. Within a few years TGC became a genuine production company, in which style, look, and mode of delivery became as important as the content being delivered. And this is exactly as it should be. Audio and video media demand clarity and precision; the “ahs” and “ums” and garbled pronunciations and mismatched tenses that we tolerate in a live lecture are intolerable in media, because we are aware of the fact that in making media they can (and should) be corrected.

Enough. Read the article. Then buy another TGC course; preferably one of mine. And while watching and/or listening, let us be aware, as best as we can, of the tens-of-thousands of hours that go into making these courses – these productions – the little masterworks that they indeed are.