The Making of a Course – Part Five 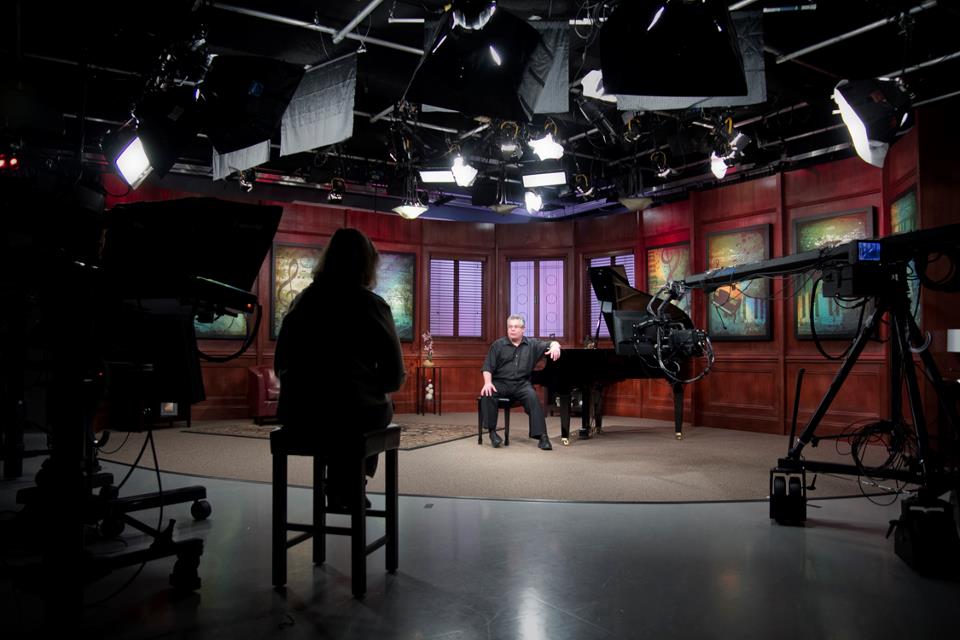 As I mentioned in an earlier entry, when I made my first Teaching Company/Great Courses course back in the spring of 1993 (“How to Listen to and Understand Great Music”, first edition and mercifully no longer available), it was against a “blue screen” background. Blue and green screen backgrounds are the simplest and most commonly used video backgrounds because they contrast most dramatically with human skin colors. Few environments short of white, padded rooms are less inspiring or interesting.

The next batch of courses I made were in 1995: “Concert Masterworks”, “Bach and the High Baroque”, and “The Symphonies of Beethoven”. They were all filmed against an erasable white board, on which I wrote – with varying degrees of legibility – the WordScores that accompanied the works under discussion. Again, as sets go, this was ugly bordering on hideous and more closely resembled a classroom environment than a video production. (These courses are still extant, and as a result I have become aware of a visual media phenomena: once one is committed to film and/or video, one will coexist with earlier manifestations of oneself for the rest of one’s days. In 1995 I was 41 years old. I weighed 30 – 35? – pounds less than I do today. My hair was black. I had a mustache. I was, in a word (or two), FREAKIN’ YOUNG. Today I continue to encounter people who do a double take when we meet, and I can tell from their eyes – instantly – what they are thinking: “this can’t be Dr. Bob; Dr. Bob weighs 165 pounds and has a mustache. This guy is gray, fat, and old!” Yes, well, 18 years will do that to us all.)

Around 2000, The Teaching Company created a set that became the mainstay for nearly ten years: a colonial-styled living room complete with early American furnishings, wainscoting, and a curtained window looking out on an ivy-covered brick wall. The ivy (plastic, of course) was a great if subliminal touch, with its evocation of estimable (and exclusive) east-coast institutions of higher learning. Dang, I loved that ivy! When the set was demolished, my friend Lucinda Robb – who was at the time director of professor development – sent me a piece of the ivy in a display frame. It sits in a place of honor on my desk.

The space in which we record today is large and adaptable for all sorts of different “settings”. For my courses, it easily accommodates a grand piano, rugs, and furniture (or not). Posters hanging on the paneled walls reflect the subject matter being taught. Lighting is no longer provided by skin-cooking halogens but by some technology that I do not understand but most surely appreciate. All-in-all, I find it an extremely tasteful and comfortable environment in which to work.

Though I do miss that ivy.