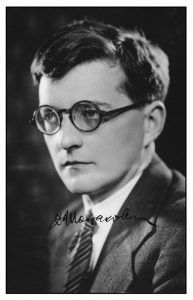 A signed photograph of Shostakovich dating to the early 1930s, at the time he was composing Lady MacBeth

Lady Macbeth was, from day one, a smash hit. It was declared a masterpiece, the best Russian opera since Musorgsky; one reviewer said that such an opera:

“Could have been written only by a Soviet composer brought up in the best traditions of Soviet culture.”

With the premiere of Lady Macbeth, the 28 year-old Shostakovich’s international reputation as the leading Soviet composer was locked in. By 1936, it had been performed 83 times in Leningrad and 97(!) times in Moscow; within five months of its premiere it had been broadcast five times. In the two years following it’s premiere Lady Macbeth was performed in New York, Stockholm, London, Zurich, Copenhagen, Argentina and Czechoslovakia. Inside the Soviet Union, Shostakovich became a celebrity: his artistic plans and progress, his comings and goings, were tracked by the press; his ideas on topics both musical and nonmusical were solicited, and he was elected a deputy of Leningrad’s October District.

And then on January 26, 1936, the sky fell. Joseph Stalin, along with Vyacheslaz Molotov, Andrey Bubnov, and various other high-ranking Soviet muckity-muckniks attended a performance of Lady Macbeth at the Bolshoi Theater in Moscow. It was a performance that nearly cost Shostakovich his life.

It comes as a surprise to many that the artistic atmosphere in Soviet Russia during the mid-1920s was open, liberal, and experimental. Yes, Lenin had written that “art belongs to the people”, but there existed no scientifically tested Marxist standards for evaluating art in general and music in particular. How does ideology relate to a symphony? Lacking strict guidelines, the first decade of Soviet art was characterized by a remarkable degree of experimentation and individuality. And it was during this decade that Shostakovich came to his maturity as a composer.

But by the late 1920s and early 1930s, the hairy hand of Soviet oppression was reaching into the world of concert music. The big shoe dropped on April 23, 1932, when the Central Committee of the Communist Party released the following resolution concerning music:

“Henceforth, musical works should have a socialist content and should be expressed in a readily understood language and addressed to the people at large. The party also requires the expression of nationalist feelings and the use of folk materials in musical works.”

The party proceeded to close the Soviet Union to all Western musical modernism.

Official spokes-persons for government policy developed a weird jargon in which music was evaluated not on its own merits but on its “Doctrinal Purity”. For example, in his “History of Russian Music” published in Moscow in 1958, Yuri Keldish denounced Stravinsky’s music as:

“The reactionary essence of modernism as an anti-folk end in art, reflecting the decadent ideology of the imperialistic bourgeoisie.”

The most dreaded charge that could be leveled against a composer was one of “Formalism”: a catchword for anything modernistic and/or personally expressive, anything that did not reflect the “heroic ideals of the Soviet working class”. The composer Sergei Prokofiev correctly wrote that:

“‘Formalism’ is the name given to music not understood at the first hearing.”

How did Shostakovich adapt to the increasingly hostile Soviet artistic environment? 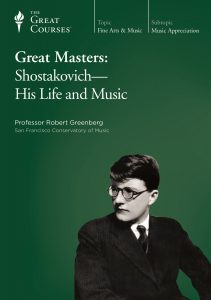 First, to his great credit, he continued to compose the sort of music he wanted to compose, like the opera Lady MacBeth of Mtsensk (completed in 1932). But while Shostakovich walked the walk, he most certainly did not talk the talk. He had to work and survive, so he became a hypocrite. For example, when the Russian Association of Proletarian Musicians condemned what they called “light music” (meaning gypsy music and jazz, two genres of music that Shostakovich adored), he put his name behind the campaign to purge the community of musicians guilty of disseminating gypsy music and jazz. He wrote:

“Only together with all of Soviet Society, leading widespread educational work on the class essence of the light genre, will we succeed in liquidating it.”

Dude. And this from a guy who had just incorporated an arrangement of “Tea for Two” in his ballet The Golden Age (1930)!

Back then to Shostakovich in 1936. Because of his precocity; because he was the first great composer to develop and flourish under the Soviet regime; because of the hardline he took – verbally! – against artistic decadence and formalism; because of the popularity of his music, because of all of this Shostakovich had managed – for the most part – to float above the dictates of Soviet musical doctrine. Well, not after Stalin and his homies attended that performance of Lady Macbeth on January 26, 1936 and stomped out of the theater after having heard the first act, livid and enraged over what they called “this degenerate music!”

Two days later, on January 28, 1936, the Soviet artistic community was stunned by the appearance of an unsigned editorial entitled, “Muddle Instead of Music” in Pravda, the official newspaper of the Central Committee of the Communist Party. It is likely that the editorial had been dictated by Joseph Stalin himself:

“From the very first moment of the opera the listener is flabbergasted by the deliberately dissonant, muddled stream of sounds. Snatches of melody, embryos of a musical phrase drown, struggle free and disappear again in the din, the grinding, the squealing. To follow this ‘music’ is difficult, to remember it is impossible. The music quacks, hoots, pants, and gasps in order to express the love scenes as naturally as possible…”

The article ended with an undisguised threat:

Just a bad review? No, not in a country where, between 1936 and 1938, many millions of Soviet citizens were executed or sent to the Gulag during Stalin’s dreadful Terror.

An example had been made of Dmitri Shostakovich: the best and the brightest had been cast down, converted – by official sanction – from the most brilliant compositional star in the Soviet firmament to a pernicious purveyor of depraved bourgeois formalism: a cultural enemy of the people!

“In 1936, the composer and everyone around him were certain that he would be arrested. His friends kept their distance. Like many other people at that time, he kept a small suitcase packed and ready. They usually came for their victims at night. Shostakovich did not sleep. He lay listening, waiting in the dark.

After the ‘Muddle’ article, Shostakovich was in despair, near suicidal. The constant anticipation of arrest affected his mind. For nearly four decades, until his death, he would see himself as a hostage, a condemned man. The fear might increase or decrease, but it never disappeared. The entire country had become an enormous prison from which there was no escape.”

Shostakovich, bless him, lived to compose another day, which is a story for another time. But the events of 1936 changed him forever, and his fear and loathing of the Soviet bureaucracy affected – profoundly – his life and his music until his death in 1975.