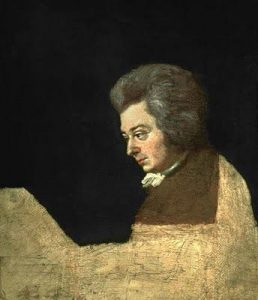 A portrait of Mozart dating from 1782/83 by his brother-in-law, Joseph Lange. The portrait is incomplete; Lange planned to depict Mozart playing a piano. Incomplete or not, Lange’s portrait was considered by Mozart’s contemporaries to be the most accurate depiction of Mozart ever made.

Tomorrow, December 5, marks the 222nd anniversary of the Death of Johannes Chrysostomus Wolfgangus Theophilus Mozart, who died in Vienna at the age of 35 on December 5, 1791.

Few historical events have been subjected to as much speculation as the cause of Mozart’s death. So many different theories and stories have been suggested over the years that it’s impossible to discuss (or refute) them all. So let’s examine the facts as best as we can and then discuss a few of the alternative explanations for Mozart’s death. First, “the plot.”

During the summer of 1791, Mozart was anonymously commissioned to write a Requiem mass. More than any other single element, it is this fact that served to create the myth of Mozart’s murder:

“An uncanny messenger had delivered a summons from the underworld to prepare a doomed hero for an appointment in Samarra.”

Near the end of her life, Mozart’s widow Constanze purportedly told Mozart researchers Vincent and Mary Novello that:

“Some six months before his death he was possessed with the idea of his being poisoned – ‘I know I must die’, he exclaimed, ‘someone has given me aqua toffana [a mixture of arsenic and lead] and has calculated the precise time of my death – for which they have ordered a Requiem. It is for myself that I am writing this.”

Less than a month after Mozart’s death on December 5, 1791, the following notice appeared in a Berlin news weekly:

“Mozart is – dead. Because his body swelled up after death, some people believe he was poisoned. Now that he is dead the Viennese will at last realize what they have lost in him. In life he was constantly the object of cabals, which he at times may well have provoked by his irreverent manner.”

This is the earliest recorded statement that Mozart may not have died a natural death.

So: Who did it? Who killed Mozart?

According to Alexander Pushkin, in his one act play Mozart and Salieri (1830), it was none-other-than the Viennese Court Composer Antonio Salieri. Pushkin’s play was turned into an opera by Nicolai Rimsky-Korsakov in 1898, and this riff became the backbone of the play by Peter Shaffer and the movie Amadeus.

And on what do these writers base their premise? In 1823, at the age of 73, Antonio Salieri slashed his own throat. He survived this little “shaving accident” and, until his death two years later, claimed that he had poisoned Mozart. (Aha! So the Italians got him after all, snotty little Austrian upstart! Nipped him in his prime, they did! Arrivaderci, Amadeo!)

But not really. There’s virtually no reliable evidence that points to Salieri or the involvement of any Italian “cabal” in Mozart’s death. And Salieri was quite insane when he made his “confession”; maybe not quite as crazy as Dennis Rodman, but crazy enough.

Writing in 1861, G. F. Daumer claimed that the Masons killed Mozart. According to Daumer, Mozart revealed Masonic secrets by writing The Magic Flute; his punishment was death. (That Emanuel Schikeneder, who actually wrote the libretto for The Magic Flute, lived until 1812 and died of natural causes did not seem to bother Daumer.)

Daumer’s premise was extended in 1910 by Hermann Ahlwardt, who claimed, in his book Mehr Licht, that it was the Jews who were the power behind Mozart’s death. This was taken another step by neuropsychiatrist Mathilde Ludendorff, the wife of the WWI German general. She claimed that Mozart, at heart an Austrian/German nationalist unwilling to write in the Italian style, was killed as a result of a Jewish-Roman Catholic conspiracy, spearheaded by the Jesuits and the Masons, in order to establish a cosmopolitan Jewish world-state.

Could I make this up?

We could go on. In a book published in 1971, the German doctor Dieter Kerner continued to argue that Mozart was murdered by the Masons, although we should all be relieved to learn that the Jews were no longer named as co-conspirators.

Let’s say it all together: Mozart was not poisoned. Not one of the doctors who attended him in his final days ever suggested that he had been poisoned. And if Mozart had indeed been poisoned by aqua toffana, he would have suffered from a severe burning pain in the mouth, throat and abdomen, scalding tears, muscle spasms, a blue line on the gums, among other things. Mozart experienced none of these symptoms. So, for now at least, we must leave the conspiracy theories to those fine folks who prefer not to let the facts get in the way of a good story.

(And the myth of the “anonymous” commissioner of the Requiem? As it turns out, it had been commissioned by Count Franz Walsegg, a very wealthy musical amateur whose M.O. was to commission works from professional composers and then pass them off as his own. Walsegg wanted to add Mozart to his stable of ghostwriters, and Mozart, desperate for money, was willing to comply. The Requiem, left unfinished at Mozart’s death, was not intended as his own funeral music. It was a gig, a well paying composer-for-hire gig. It is also, sadly and ironically, the last music he ever wrote.)

Tomorrow I’ll offer up some of the actual diagnoses that have been put forward to explain Mozart’s terribly premature death. Until then.