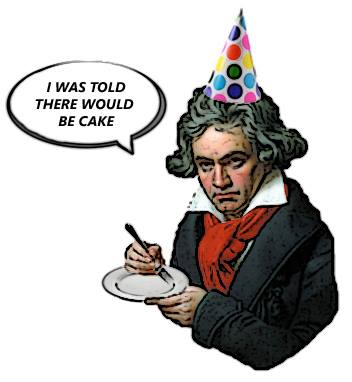 In honor of the day I offer up a few Beethoven jokes.

The available repertoire of Beethoven jokes is, unfortunately, rather poverty stricken. Out of sheer stubbornness I refuse to relate any joke that concludes with the line, “Oh, that’s just Beethoven decomposing.” Neither will you find any of the various jokes that conclude with the line, “the bassists were loaded in the bottom of the 9th” or “Arnold Schwarzenegger never performs Beethoven because he claims ‘I’ll be Bach’”. Finally, we will not repeat any of the “what’s on the piano stool?/Beethoven’s last movement” jokes here; HEY, I’m trying to maintain a modicum of taste in this blog, okay?

Having just crossed the road, why did Beethoven kill the chicken?
It kept saying ‘Bach, Bach, Bach’.

Why couldn’t Beethoven find his composition teacher?
Because he was Haydn.

A very old conductor was about to perform his final concert. An audience member in the front row beckoned to a violinist and asked, ‘What’s the old man conducting tonight?’ The violinist answered ‘I don’t know what he is conducting but we’re playing Beethoven’s Fifth.’

(I know, this is more a conductor joke than a Beethoven joke, but like I said, halfway decent Beethoven jokes are few and far between, so we must take what we can get.)

Yes, pretty stupid. But I do believe that Beethoven himself would have liked them, yes I do! Meanwhile, should you be so inclined, I would ask that you offer up a Beethoven story of your own.