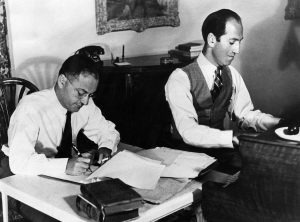 A heads-up, hope-I-see-you-there: I will be doing a program on February 13 at Sinai Temple, at 10400 Wilshire Boulevard in what we, here in Northern California, call the “South Land” – the City of Angels, Los Angeles – at 7:30 P.M. My working title for the talk is “Gershwin and Copland: American Concert Music Comes of Age”; Sinai Temple is marketing it under the title “Jewish Roots in American Music”. Whatever. It’s going to be a fun evening: lots of fascinating info, lots of great music (I’ll be performing a number of Gershwin’s songs with Sinai’s Cantor Marcus Feldman). Here’s a description of the program:

Eclecticism is as American as apple pie. In a culture defined by its multiplicity, any concert music that purports to be “American” must, somehow, reflect that multiplicity.

Such an “American concert music” did not emerge until the first decades of the twentieth century, when American-born composers began to synthesize ragtime, jazz, Anglo-American and Hispanic folk music, popular song, and elements of American musical theater into their concert works.

The music of George Gershwin and Aaron Copland exemplify this emergence. Gershwin brought elements of ragtime and jazz to his Broadway scores and subsequent “concert” works and operas. Copland – formally trained in the European concert tradition – was determined to create a uniquely “American” body of work, and to that end his music drew freely from such diverse traditions as jazz, North American and Latin America folk music and dance, as well as European modernism.

This talk will examine the flowering of a uniquely “American concert music tradition”, focusing in particular on the lives and music of George Gershwin and Aaron Copland.

« The Making of a Course – Part Nine – The Wrap-up
How To Get and Keep Kids Interested In Concert Music – Part One »
Categories : Speaking Engagments