As American as tarte aux pommes! Celebrating the Fourth with some American Music 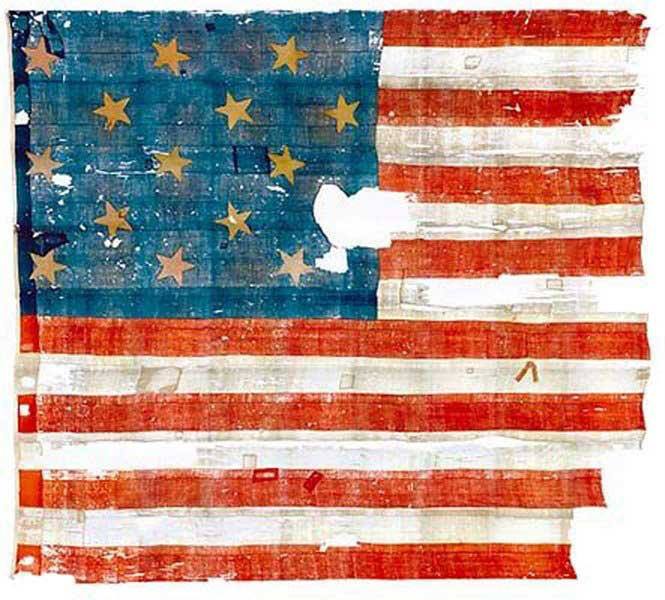 THE star spangled banner, the one that flew over Fort McHenry that fabled night in 1814, today housed in the Smithsonian

I began blogging about a year-and-a-half ago. I was working with a publicist at the time that in turn worked with a vast number of sites. She would suggest topics to me and then place the blog with a subject-appropriate site. By far the majority of these pieces were “top ten” style pieces written for parenting sites: “the ten best pieces of music with which to put your child to sleep”; “the ten best ways to get your child interested in concert music”; “the ten best cocktails to drink while listening to your child practice the violin”, and so forth. However, my great early ambition as a blogger was to be published in the Huffington Post.

Ah, Huff Post: edgy, hip and happening. And then there’s Arianna Stassinopoulos herself: smart, chic, articulate, beautiful; a published biographer (Maria Callas and Pablo Picasso), author and columnist; a liberal democrat turned conservative who married republican California congressman Michael Huffington and then swung back to the left after her divorce in ’97; media entrepreneur; and candidate for Governor of California in 2003. (During a campaign debate, Arnold Schwarzenegger famously but incorrectly told her: “Your personal income tax have the biggest loophole. I can drive my Hummer through it, that’s how big loophole is.” This is the man we Californians elected governor. Twice.)

Well: put it all together and Arianna Huffington is for a wonk like myself what Jessica Simpson is for Harley Davidson owners: my poster girl, my secret sweetheart, my Greek goddess.

So you can understand how badly I wanted to be “published” in Huff Post.

Published I was; a number of times.

What a disappointment. To paraphrase the tree-falling-in-the-forest joke, “if an article appears in Huff Post, and no one is there to read it, was it ever written at all?” Given the sheer number of daily entries and the labyrinthine nature of the site, my pieces were, de facto, invisible and garnered – as I recall – not a single comment.

The two upshots of this experience are as follows. One, I write for one site only: my own. Two, I reprint herewith a piece written for and published by Huffington Post last July 4th, in honor of our national anthem. Entitled “As American as tarte aux pommes! Celebrating the Fourth with some American Music”, I am assuming (or hoping, at least) that someone will actually read it this time around.

What can be more “American” than to celebrate the Fourth of July with a hot dog, a beer, and a stirring rendition of The Star Spangled Banner? Dang, my throat gets dry and my eyes moist just thinking about it.

Except that the slim sausage served in a roll that we call a “hot dog” was invented in Germany. (In Frankfurt, pork sausages served up in buns -“frankfurters” – have been a local finger-food since the thirteenth century. In Vienna – “Wien” in German – a pork and beef sausage eaten in a bun is called a “wiener”.)

There’s nothing particularly “American” about beer, either. In fact, beer is a universal drink: it is the most widely consumed alcoholic beverage and after water and tea the third most popular drink on the planet. (The invention of beer very likely dates back to the early Neolithic – ca. 9500 B.C.E. – and while we cannot know exactly who invented it, we can be pretty sure that he would view the bulk of the brews mass-produced in the U.S. of A. with appropriate disdain, noting that any fluid that looks and tastes the same coming out as it did going in is probably not worth ingesting in the first place.)

So much for hot dogs and beer being, in any way, intrinsically “American”. Well, at least we have The Star Spangled Banner, a national anthem we can be proud of even if its huge melodic range makes it almost impossible to sing. (This, of course, doesn’t stop folks from trying to sing it. Few tortures outside of shopping for bathing suits can be more exquisitely painful than listening to the strangled, canine ululations of pop divas attempting to “sing” The Star Spangled Banner before sporting events.)

Anyway, The Star Spangled Banner – which has been the official national anthem of the United States since an act of congress made it so on March 3, 1931 – would seem to be a truly American classic.

Yes, the lyrics – the “words” – are American enough. They are drawn from a poem entitled “Defence [sic] of Fort McHenry”, written in 1814 by a 35 year-old lawyer named Francis Scott Key after witnessing the fort’s bombardment by the British Royal Navy during the War of 1812. As for the music, it is as American as spotted dick, which is to say that it is not American at all but rather 100% ENGLISH, as in ENGLAND, as in the same good folks who bombarded Fort McHenry in the first place.

The Star Spangled Banner is a “contrafactum”: a song in which a pre-existing melody is fitted out with new words. The beauty of a contrafactum is that it is instantly “learnable” because it uses music we (presumably) already know. And while contrafacta were more common in a pre-electronic, print-dominated age, we are still surrounded with them; heck, Allan Sherman and “Weird Al” Yankovic made their careers creating contrafacta.

The “pre-existing pop-tune” on which The Star Spangled Banner is based is an English song in praise of wine entitled “The Anacreontic Song” (which is also known by its incipit – or “first words” – as “To Anacreon in Heaven”). The music was written by a teenager named John Stafford Smith in the mid-1760’s as the official song of the Anacreontic Society, a London-based gentlemen’s club for amateur musicians. The first verse – the words were written by an amateur poet named Ralph Tomlinson – goes like this:

(Our suggestion to Mr. Tomlinson: do not quit your day gig.)

The popularity of this ditty quickly spread beyond the confines of the Anacreontic Society clubhouse. Various new lyrics were appended to it, including several patriotic versions in the brand-new United Stated of America. The most popular of the pre-Francis Scott Key versions was one entitled “Adams and Liberty”, which was written by the Bostonian Robert Treat Paine Jr. in 1798.

Personally, I take comfort in the international origins of so many of the traditions we now deem as being “American”. We are reminded that ours is a melting pot culture, and that diversity, inclusivity, and tolerance are our great strengths. So pass them dogs, load ‘em with kraut, pop a brewski, sing about the Banner and know that collectively, it doesn’t get any more American than this.