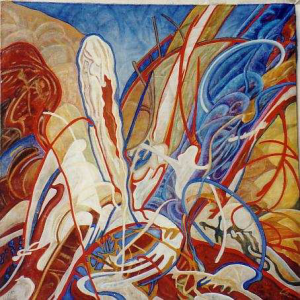 By Codingbq (Own work) [CC-BY-SA-3.0 (http://creativecommons.org/licenses/by-sa/3.0)], via Wikimedia Commons

As a young’un, I played the usual instructional piano stuff, starting with the then ubiquitous pedagogic set by John Thompson, red-covered piano books beginning with a series called “Teaching Little Fingers to Play” and then moved on to “John Thompson’s Modern Course for the Piano.” By the time I was fourteen I could play a handful of Beethoven Sonatas, Bach’s Two and Three-Part Inventions, some Chopin and Schubert, a batch of Romantic fluff, and blah blah blah. Truth be told, I was bored with the “classics”, and while I spent a good bit of time writing my own, primarily rock ‘n’ roll flavored ditties, I stopped practicing the piano.

And then I was hit by the bolt from the blue, my epiphany, my life changer: at the age of 14, I discovered jazz. Here was a music with all the rhythmic intensity of rock ‘n’ roll but magnified – to my ear, a gazillion fold – by the polyrhythmic magic that is swing. I was gob-smacked by the harmonic complexity of jazz , by its melodic sophistication, its discipline, its conversational nature and its freedom from the printed page.

I began practicing the piano again and by the time I was eighteen I was gigging in and around Princeton New Jersey, then in New York, and finally here is the San Francisco Bay Area when I moved in ’78. I stopped playing for money in the mid-1980’s when my teaching schedule and my desire to actually have a life precluded me from playing weekend and evenings. (FYI: the very first band and very last band I played in each had a temperature-challenged name: when I was 16 or so it was a band called “Cold Sun” and in the mid-eighties one called “Hot Borscht.”)

I still listen to a lot of jazz, and while I no longer play for the dollar, I continue to play a lot of jazz piano. (The immediacy and spontaneity of jazz improvisation offers a necessary antidote to composing and writing lectures, which require long-range planning, delayed gratification, and a certain plodding tenacity.)

Over the next weeks I will take the opportunity to write a number of “appreciations” for the jazz players and composers who have influenced me most powerfully, including the pianists Erroll Garner, Bill Evans, Thelonious Monk, Dave Brubeck, Oscar Peterson, Chick Corea, Herbie Hancock, Keith Jarrett, Dave McKenna, Lennie Tristano and Sal Mosca; the saxophonists Benny Carter, Lee Konitz, Paul Desmond, and John Coltrane; the drummer Tony Williams; and of course, pops himself, Louis Armstrong.

This is an entirely personal list and thus makes no attempt to be comprehensive. There are no vocalists or bandleaders included, no Ella Fitzgerald, Billie Holiday, Duke Ellington or Benny Goodman. The beboppers are MIA entirely: no Charlie Parker, Dizzy Gillespie, or Miles Davis. There are no “free Jazz” dudes, no Albert Ayler, Ornette Coleman, or Cecil Taylor (frankly, I’d rather have root canal; perhaps my taste is flawed).

There are no young people on my list because I myself am not particularly young and my tastes and preferences were formed many moons ago.

My list is overwhelmingly piano heavy. That’s because I’m a piano player and the great bulk of the jazz I listen to is for the piano. The pianists I listen to are those who play the ENTIRE PIANO WITH BOTH HANDS.

This exercise will allow me to share with you some of my favorite musicians and recordings and that, my friends, is one of My Favorite Things.

Below: the miraculous Dave McKenna (1930-2008), the greatest saloon pianist of all time (though the least well-known of the pianists listed above), playing “Lulu’s Back in Town” by Harry Warren (1935) in about 13 different keys. This guy swings like nobody’s business and has a left hand that could sink a battleship.