Posted by Robert Greenberg on Wednesday, May 22nd, 2013 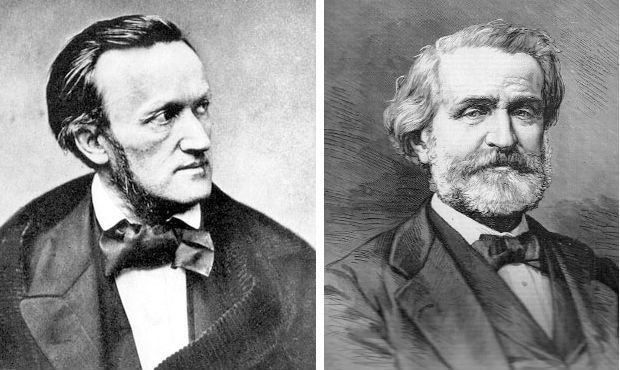 We are about to embark on the greatest one-two birthday punch in the history of opera. Tomorrow – May 22 – marks the 200th anniversary of the birth of Wilhelm Richard Wagner. 151 days later – on October 10 – we will celebrate the 200th birthday of Giuseppe Fortunino Francesco Verdi, aka “Joe Green, the Italian opera Machine”.

Of course, the musical festivities have been going on for many months already; we can hardly turn over an operatic rock anywhere on the planet and not find a Wagner or Verdi festival or a Ring Cycle underneath.

The opera season notwithstanding, the popular media is poised to jump on the Wagner-Verdi bandwagon, and we should thus gird our loins in anticipation of the onslaught of information and misinformation, facts and opinions-parading-as-facts, articles and books, radio shows, recordings and documentaries, all timed to coincide with the birthdays.

Among those documentaries is an hour-long radio show created by the venerable WQXR in New York entitled “Clash of the Titans: An Exploration of Verdi & Wagner.” Created by Jeff Spurgeon and Aaron Cohen, the show seeks to compare and contrast the lives and music of Wagner and Verdi. It is an honest and intelligent piece that might tick off a few Wagner fans, if only because those Wagnerians still prefer not to acknowledge the more unsavory aspects of their hero’s personality.

The not-unexpected kicker is that I was interviewed for the piece and the creators have, in their wisdom, chosen to include long chunks of my interview in the program. And while it receives its “official”, on-air debut tomorrow, on the 22nd, it can be heard now on the WQXR website via the link below.

So put on your party hats, get your hands on a party-blower/horn, and let’s wish Richard Wagner a happy 200th. Heck, let’s even give the little fella a hearty metaphorical handshake, a fist-bump, a man-hug (one of those shoulder-to-shoulder things) and perhaps even a bus on the cheek. Considering the glories Herr Wagner has given to us, it’s the very least we can do.