Posted by Robert Greenberg on Monday, May 6th, 2013 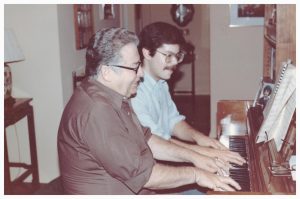 My father and I struttin’ some four-hand action circa 1980

A birthday greeting and appreciation to my father – Alvin R. Greenberg – who turned 88 today.

More than anyone else, it is my dad who is responsible for my career in music, a fact that at one time might have given him some cause for regret but which, at this point, provides more pleasure than pain.

My father’s mother – my grandmother – was an excellent pianist who graduated from the New York Institute of Musical Art (later the Juilliard School) with a degree in piano in 1916. She went on to teach three generations of piano students in the borough of Queens, where my father grew up. Of all the hundreds (thousands?) of students she trained, perhaps her greatest hopes were for her son (my father) who – so she hoped – would someday take his place among the pantheon of great pianists. To that end he was subjected to just the sort of Tiger Mommy practice-at-all-costs discipline that makes the more sensitive among us cringe: hours of enforced technical exercises and practice; recitals in high-end New York venues; never mind being a kid and going outside to play (“Play? You want to play? Play Chopin – that’s playing!”).

In time my father became one of that countless number of harried talents who rebelled and walked away from the instrument. Then World War Two intervened, and with it, service in the South Pacific. But when he came home from the Navy, he also came home to the piano, which he took up once again. I grew up listening to him play most evenings, in particular the songs of what today is referred to as “The Great American Songbook”: the music of George Gershwin, Irving Berlin, Jerome Kern, Richard Rodgers, Harold Arlen, and their various Tin Pan Alley colleagues.

With my father as role model, playing the piano was the most natural thing in the world for me to do. And the great American popular songs of the 1920’s and ‘30’s became – along with the Rock ‘n’ Roll of the 1960’s – my singular musical birthright. (I still remember, as a teenager, telling my grandmother about my love for Rock, Jazz, and the “standards” – as the popular song repertoire was then known. She looked sharply at my father and said disapprovingly that she hoped that my enthusiasms would not lead me to “neglect the classics.” My father rolled his eyes.)