Who Benefits? Who Profits? 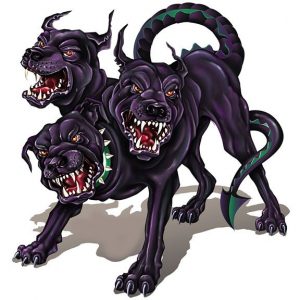 So here we are.  It’s almost 2013: roughly one-eighth of the way through the twenty-first century.   The music of the twentieth century, which seemed so contemporary but a few years ago, is now the music of the last century.  Which brings up a painful fact, one that I am frequently called on the carpet over, and that is, why is there so little twentieth century music in my Great Courses surveys?

The answer: it is because of fear, greed, short-sightedness and sometimes pure venality.  Not mine, but rather, that of the lawyers and publishing houses that guard the estates of living and recently deceased composers with a drooling, single-minded ferocity that makes Cerberus the three-headed dog from hell look like the Taco Bell Chihuahua by comparison.

Here’s the scoop.  Music remains under copyright until 75 years after the death of its composer.  Some composer’s estates and publishers will indeed allow us to license their music for use, which is the reason why the music of Aaron Copland and Dmitri Shostakovich is frequently featured in my courses.  Other publishers are virtually impossible to work with, which is why I can no longer feature the music of – for example – Béla Bartók, Olivier Messiaen, and Charles Ives.

The situation with Ives is particularly egregious, and might be considered the poster-child for this whole sorry state of affairs.  In his own lifetime, Ives (1874-1954) refused to take a penny of royalties for his own music, claiming that music belonged to everybody.  When Ives won the Pulitzer Prize for music in 1947 he gave the money away, stating that “prizes are for boys and I’m all grown up.”  Yes, Ives could afford to be generous because he was a rich man, having made a fortune in the insurance business.  Nevertheless, Ives’ existential altruism informed every part of his life, and that is why his often challenging music is so damned good.

Ives’ present-day publisher – the Philadelphia-based firm of Theodore Presser – lacks entirely Ives’ altruistic attitude towards money.  And that is perfectly fine; Presser is a business, not a charity.  Nevertheless, the firm has made it so difficult to license his music that we must remove the lecture on Ives’ “Three Places in New England” (1914) from my “Thirty Greatest Orchestra Works” survey and replace it with a lecture on Camille Saint-Saëns Symphony No. 3 (1886).  The Saint-Saëns is a fine and worthy piece, though this is, nevertheless, a dispiriting bit of business.

Regarding the “full-court Presser” put on Ives’ music: who profits; who benefits?  Does the publishing house of Theodore Presser benefit?  Does Ives’ legacy benefit?  Do modern listeners, who deserve mightily to better know Ives’ music benefit?  No: nobody benefits, except perhaps the apparatchiks at Theodore Presser, who can validate their own salaries by stringing companies like The Great Courses along before lowering the boom.

Of course all of this is completely counter-intuitive, as you’d think that featuring a composer in a Great Courses survey would be considered by pretty much everyone to be a good thing.  But in their desire to “preserve the sanctity” (or, more accurately, “maximize the profits”) of a composer’s work, the guard dogs make it impossible for people like me to celebrate their music, and we are all the poorer for it.  If someone out there knows how to make this change, I’d sure love to hear about it.