The Making of a Course – Part Two 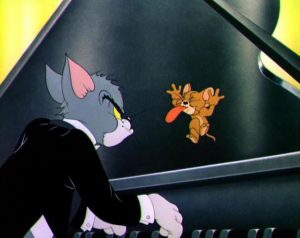 We will begin a full recording schedule tomorrow (Thursday). Preliminaries today: making friends with the piano, technical rehearsal, catching up with colleagues and crew.

One of the things that makes this course special is that instead of using pre-recorded musical examples, our musical examples will be custom-recorded by three professional concert pianists. Thus, we will not only hear the music but we’ll be able to watch the pianists play as well. I don’t know about you, but when I go to a concert featuring a piano, I always want to sit on the left side of the auditorium so I can watch the pianist’s hands. The issue is more than just watching – with amazement – flying fingers. Like an actor’s body language, the manner in which a pianist “addresses” the keyboard will tell us much about the nature of the music being performed. Bach and Mozart require a pianist to stay centered on the keyboard, with hands close to the keys and elbows in. Chopin’s music demands an almost balletic grace from hand and arm, whereas Liszt’s music – which often seems to cover the entire keyboard at once – will, at such moments, require movements more often seen in an aerobics studio than on a concert stage. The drum-like percussivity of Prokofiev’s Piano Sonata No. 7 and Copland’s Piano Variations (lectures 22 and 23, respectively) require hammer-like, up-and-down motions, whereas Debussy’s Préludes (lectures 16 and 17) generally demand a gentler, more in-and-out motion at the keyboard.

The larger point: watching a pianist has much to tell us about the music being performed, and it’s an opportunity video viewers will have with this course.