The Making of a Course – Part 8 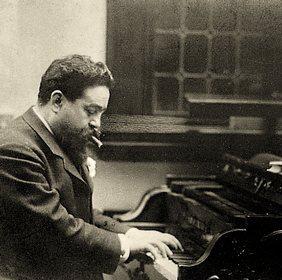 It’s not unusual that in the course of recording a lecture, I find myself particularly inspired by the music I’m privileged to be talking about. That happened today in talking about (and listening to) Issac Albéniz astounding Iberia of 1909. Iberia consists of twelve separate movements, each illustrating some aspect of Spain or Spanish culture; eleven of the twelve focus specifically on the southern region of Andalucía.

As a reminder, I’m recording a course rather clumsily entitled “The 23 Greatest Solo Piano Works.” Iberia is as close to a “sleeper” as I have in this course, meaning that of all the featured pieces, it is almost certainly the least well-known. The same could be said of Albéniz himself, whose music is only rarely heard outside of Spain.

In his own lifetime (1860-1909), Albéniz and his music had to deal with a sort of “damned if you do, damned if you don’t” critical response. You see, for many non-Spanish critics, the lack of German-styled development in Albéniz’s music doomed it to second class status. For these critical wizards, Iberia was nothing but a collection of salon pieces, distinguished only by their virtuosity.

For many Spanish critics, Albéniz’s Chopin-and-Liszt-inspired pianism, his Debussy-inspired harmonic palette, and his pianistic virtuosity made him a “sellout”: for these blockheads, his music was too continental to be “authentically Spanish.”

All these critics should suck eggs.

Here are the facts. In Iberia, Albéniz elevates the “picturesque” to high art. He does this by creating wonderful and entirely original themes, by his superb (and most advanced) harmonic usage, his variational instincts, expressive depth, and incredible pianism. In Iberia, the piano is at once an orchestra, a voice, bells, guitars, castanets, and flamenco dancers. What might have become in the hands of a lesser composer a set of exotic salon pieces, “dependent upon repetition and color for their effect” are, in Iberia, masterworks of synthesis and intensity: works of the greatest artist depth, feeling, meaning, and sophistication.

Don’t let anyone tell you any different.

Own Alicia De Larrocha’s recording on London/Decca. Be prepared to kvell.