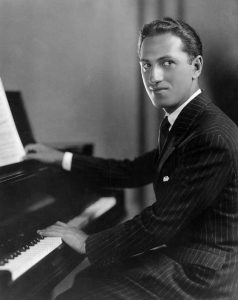 81 years ago today – on October 10, 1935 – George Gershwin’s Porgy and Bess opened at the Alvin Theater in New York City. With a libretto by Dubose Heywood (whose play Porgy was the basis of the libretto) and Gershwin’s older brother Ira, Porgy and Bess ran a frankly unimpressive (by contemporary Broadway standards) 124 performances before it closed.

Porgy and Bess was applauded for the beauty of its numbers but roundly criticized for being neither fish nor fowl. The critic Samuel Chotzinoff – ordinarily friendly to Gershwin – wrote:

“As entertainment it is a hybrid, fluctuating constantly between music drama, musical comedy, and operetta.”

Given the version of Porgy and Bess that he heard, Chotzinoff’s criticism is entirely justified. And therein lies a tale.

George Gershwin’s amazing success as a composer of Broadway musicals and jazz-influenced concert works lit a fuse deep inside him: a desire to compose a full-length, no-holds-barred, knock-‘em-out-of-their seats American opera. His life-long affinity with the music of the African-American community – drumming, ragtime, jazz, and the spiritual – drew him like a bear to honey to a play called Porgy by Dubose Heywood. Heywood’s Porgy was produced on Broadway in 1927 and depicts life and death in the black community of “Catfish Row” (modeled on a real neighborhood called “Cabbage Row”) in Charleston, South Carolina.

Gershwin composed Porgy and Bess over a period of 20 months between 1933 and 1935. The finished opera was in all ways “grand”: the 700 page score would require roughly 4½ hours to perform.

A grand opera demands the resources of a grand opera house. And yes: the Metropolitan Opera was more than interested in Porgy and Bess. The President of the Met’s Board Otto H. Kahn even offered Gershwin a $5000 bonus if he’d allow the Met to produce the opera. (Gershwin was sorely tempted: in his short lifetime he’d come a long way from the tenements of Brooklyn, where he grew up.) But there were two deal breakers in the Met contract. The first one was the number of projected performances. As a theater composer, Gershwin was used to seeing his musicals run for hundreds of performances, whereas the Met could only guarantee 4 or 5 performances. But even worse from Gershwin’s point of view was the make up of the cast. Gershwin composed Porgy and Bess to be performed by predominately black singers. This was out of the question for the Met, which insisted on white singers performing in black face.

So Gershwin walked and instead signed a contract with the Theater Guild to have Porgy and Bess performed on Broadway. But a Broadway house and Broadway audiences were not compatible with a 4½ hour-long operatic production and performance, so cuts had to be made to the score: DEEP cuts, amputations really; over half of the score was cut. Presumably, Porgy and Bess was turned into a musical, but in fact it was neither this nor that. As Samuel Chotzinoff correctly opined, the surgically altered version of Porgy and Bess fluctuated constantly between music drama, musical comedy, and operetta.

And that’s where things stood until 1976 when, 41 years after its Broadway premiere, the Houston Grand Opera under David Gockley produced, performed, and recorded Porgy and Bess as it was originally composed. Sadly, the revival came much too late for George Gershwin, who died at the terribly young age of 38 in 1937 (a brain tumor) and thus never heard Porgy and Bess as he composed it.

But it wasn’t too late for us, and Porgy and Bess – when performed as it was originally conceived – turned out to be a first-rate opera, without any doubt one of the handful of “best operas” ever composed by a native born American composer. So why did it take so long to produce it in its original form? I would suggest three reasons.

One. Sympathetic though the portrayals of black Americans may be in Porgy and Bess, they were still created by white artists and were, for better or worse, subject to the accusation of stereotyping (at best) and outright racism (at worst).

Two. Gershwin was perceived by many in the concert music community – particularly during the modernistic madness of the period from 1945-1970 – as a naive interloper, a compositional parvenu, a cross-over artist who had nothing substantial to offer the “serious”, post-war musical community.

Three. The reticence in the operatic community – until the last third of the twentieth century – to believe that an American made opera could stand on equal footing with the traditional European operatic repertoire.

Thank goodness, thanks largely to David Gockley and the Houston Grand Opera, we’ve worked ourselves through these issues and can enjoy Porgy and Bess for what it is: a alpha-class opera by a great American composer.