Posted by Robert Greenberg on Monday, May 1st, 2017 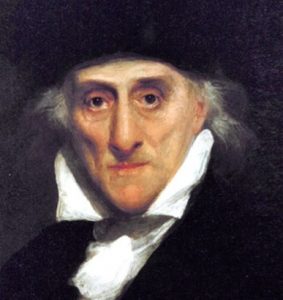 A portrait of Lorenzo da Ponte painted in his old age by Samuel Morse in New York, circa 1830

On Monday, May 1, 1786 – 231 years ago today – a miracle occurred in the great city of Vienna: Wolfgang Mozart’s opera The Marriage of Figaro received its premiere at the Burgtheater in Vienna.

100 years later, Johannes Brahms wrote this about The Marriage of Figaro: “Every number in Figaro is for me a marvel; I simply cannot fathom how anyone could create anything so perfect. Such a thing has never been done, not even by Beethoven.”

231 years after the premiere, Brahms’ awe of Figaro mirrors our own. For many of us – myself included – it is, simply, the greatest opera ever composed.

On May 7th, 1783 – three years before the premiere – Mozart wrote to his father:

“The Italian opera buffa [here in Vienna] is very popular. I have looked through more than a hundred libretti but I have found hardly a single one that satisfies me. That is to say, there are so many changes that would have to be made that any poet, even if he were to undertake to make them, would find it easier to write an entirely new text. Our poet here now is a certain da Ponte. He has an enormous amount to do, and he is at present writing a libretto for Salieri, which will take him two months. He has then promised to write a libretto for me. But who knows if he will be able to keep his word, or whether he will want to? As you know, these Italians are very civil to one’s face … I should dearly love to show what I can do in an Italian opera.”

The “poet” to whom Mozart refers – whose job it was to write libretti (opera scripts) for composers of Viennese court operas – was Lorenzo Da Ponte (1739-1848). Da Ponte had arrived in Vienna in June, 1781, just a month after Mozart himself had permanently settled there. Born Emmanuele Conegliano in the Italian city of Ceneda (today known as Vittorio Veneto) just north of Venice, Da Ponte was a womanizer, a poseur, a converted Jew, an educated and cultivated man of letters, a failed priest (you have no idea!) and became, in short order after arriving in Vienna the protégé of the court composer Antonio Salieri.

Da Ponte would eventually write three libretti for Mozart: The Marriage of Figaro, Don Giovanni, and Cosi Fan Tutte. Be still our hearts. Collectively, these operas represent the greatest collaboration of composer and librettist in the entire history of opera itself.

We’ll let Da Ponte himself tell us the gestation of The Marriage of Figaro; from his memoirs:

“In conversation with me one day … [Mozart] asked me whether I could easily make an opera from a comedy by Beaumarchais – The Marriage of Figaro. I liked the suggestion and promised to write one. But there was a very great difficulty to overcome. A few days previous, the Emperor had forbidden the company at the German theater to perform the comedy, which was too licentiously written for a self-respecting audience.”

Time out. Beaumarchais’ play, written in 1778, is a scathing, highly politicized indictment of the contemporary French aristocracy. The fact that the play takes place in Spain fooled no one; everyone understood who the play was satirizing. It was Napoleon Bonaparte himself who later said that the play was “the Revolution already in action.” When the French King Louis XVI read it he exclaimed, “This is detestable; it will never be played!” Instead, private performances were given until the king relented and allowed the play to be publically performed in 1784. Two German translations appeared immediately. Nine months after the play opened in Paris, the Austrian Emperor Joseph II banned its performance in his lands. Back to Da Ponte’s account:

“How then to propose Figaro to the Emperor for an opera? I proposed writing the words and the music secretly and then awaiting a favorable opportunity to show them to the Directors of the Opera or the Emperor himself, for which step I assumed the responsibility. I set to work, accordingly, and as fast as I wrote the words, Mozart set them to music. In six weeks everything was in order. Seizing the opportunity, I went to offer Figaro to the Emperor.

‘What!’, he said, ‘but this The Marriage of Figaro – I have just forbidden the German troupe to use it!’

‘Yes Sire,’ I rejoined, ‘but I was writing an opera, and not a play. I had to omit many scenes and to cut others quite considerably. I have omitted or cut anything that might offend good taste or public decency … The music, I may add, seems to me marvelously beautiful.’

‘Good!’ If that be the case, I will rely on your good taste as to the music and on your wisdom as to the morality. Send the score to the copyist.’”

Da Ponte’s account indulges some literary license (he was, after all, a writer). The creation of the opera was what we might call a “badly kept secret”; certainly, numerous people knew what they were working on. And while Mozart managed to compose a considerable portion of the opera in six weeks, the entire job of composing – from start to finish – took him six months: from the end of October, 1785 to April 29, 1786.

All sorts of intrigues accompanied the production of Figaro. Mozart was 29 years old and was viewed by the Italian directors of the Italian opera theater as an upstart, a German-speaking composer of piano concerti who was attempting to home in on their territory. Certain Italian administrators went so far as to demand that cuts be made to the opera. Mozart was furious, “as touchy as gunpowder” according to the tenor Michael Kelly. It was Emperor Joseph II himself, who attended the dress rehearsal (along with what was described as “half the Viennese aristocracy”) that saw to it that the cuts were restored and that the opera was performed as written.

Make no mistake about it: The Marriage of Figaro was new, contemporary opera. Its dramatic scope, its harmonic language, the complexity and sheer length of its finales were unlike anything that had ever been heard before. Da Ponte’s libretto was a masterful adaptation of Beaumarchais’ play, shortening it, reducing its number of characters, tightening its dramatic structure, and removing its political references without damaging its satirical character. For his part, Mozart had little interest in politics; for our information, his voluminous letters contain not a single reference to either the American or French Revolutions. What fascinated him were turns of plot, characterization, and relationships. Above all, it is thanks to Mozart’s extraordinary music that the story, the humanity of the characters and their relationships in Figaro are deepened and intensified to the degree they are. He was, truly, a singular dramatic genius.

Oh to have been in that audience 231 years ago today, hearing Figaro for the first time!