Lady Gaga: Melding with Geldings and the Operatic Tradition 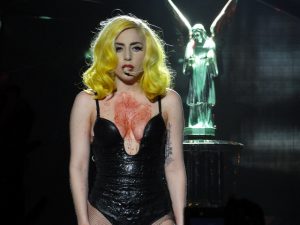 Lady Gaga, opera-like production values, and lots of tall, loose-limbed, castrated men. A description of her latest music video? No: it is a partial description of the artistic tradition from which she has grown.

According to the social critic Camille Paglia, Lady Gaga is “an identity thief . . . a mainstream manufactured product . . .”

Well, duh. In truth, Ms Paglia takes nothing away from the good Gaga by pointing out that she is part of a mainstream musical industry, one that goes back nearly 400 years. That “industry” was created in Italy and goes under the blanket designation of “opera”.

Say it with Opera

An opera is stage drama in which the words are intensified a gazillion times (give or take) by setting them to music. Since the birth of opera around 1600, and particularly since opera went public in 1637, it has been acknowledged that nothing puts derrieres in seats (and money in the box office) better than sex, violence, religious controversy, great costumes, beautiful singing and celebrity: the celebrity of the singers themselves.

Don’t Get Testes With Me!

The greatest and most celebrated singers of the seventeenth and eighteenth centuries were the famed Italian castrati: male sopranos who had been “snipped” before puberty and who then underwent an unimaginably rigorous training regimen for upwards of a decade in order to develop their voices. Notorious for their egos, their flamboyance, their glamor, their tantrums and virtuosity, and the sexual ambiguity they projected (they were, after all, men singing in the soprano range), the Italian castrati were the direct ancestors of such modern cross-sexual performers as David Bowie, Elton John, Michael Jackson and yes, Lady Gaga, whose contemporary personae trade on just this sort of transgressive sexual androgyny.

Though it was illegal to castrate pre-pubescent boys in sixteenth to eighteenth century Venice, Bologna, Florence, Rome, and Naples, the fact remains that “gelding parlors” could be found in all of these cities. It was a case of “don’t ask, don’t tell”: there was a tremendous demand for castrati on the Italian stage, particularly during their glory years between 1650 and 1750, when both male and female roles were entrusted to them. The vogue for castrati was due in part to a shortage of female singers and the fact that in many parts of Italy, including Rome, women were forbidden to appear on a public stage.

But there was also a qualitative difference between castrati and female sopranos. The castrati — who were known as the voci bianche, literally “white voices” — had larger, more powerful and more brilliant voices then women and could continue to sing professionally for as many as forty years. The castrati were also perceived as “exotics”: they didn’t just sound different than other men (and women), but looked different as well: they tended to be considerably taller on average, they lacked facial hair, and they were incredibly loose-limbed in their movements, a result of the lack of testosterone in their bodies.

These guys were the most popular and glamorous stars of their time, and the material rewards for a successful career were so great that even the slightest promise of vocal talent led many parents emasculate their own sons in the hopes of turning him into . . . well, a real soprano. Sadly, there was a kicker: neutered though they were, the voices of most castrati changed at puberty anyway. As a result, according to the contemporary English music historian Charles Burney, one saw in every Italian city numbers of these unfortunate men, “without any voice at all, or at least without one sufficient to compensate for such a loss.”

The most famous of all the Italian castrati was Carlo Broschi, who lived from 1705 to 1782 and performed under the one-word stage name of “Farinelli”. Born into a family of musicians in what today is Apulia – the heel of the Italian boot – Farinelli rose from his humble beginnings to become a legend across Europe. A brilliant, tireless, über-flamboyant performer, Farinelli was worshiped by both the cognoscenti and the public. His sexual exploits and conquests were the talk of all Europe. (Emasculation did not necessarily render castrati incapable of sexual performance, although the sexual prowess with which they were credited was more the stuff of tabloid gossip than reality. Nevertheless, in a birth-control challenged, hyper status-oriented social world, a castrato was a safe and sought out pillow partner among those upper-crust ladies who could afford to have one). Like many high-visibility performers of our time, Farinelli parlayed his popularity as a singer into major political clout. He was embraced as a friend by emperors and princes. He was, for 24 years, the confident of two successive Spanish Kings: Philip V and Ferdinand VI. He was the hero of contemporary gossip and urban legends. In what must be considered the most appropriate of all his honors, he is the title subject of three operas and a motion picture.

Song is where the Heart Is

It is a tired but entirely accurate cliché: when it comes to people, there is nothing new under the sun. Since professional singers first took the opera stage, the individual singer — depicting his or her emotions through words and music — has been the single most popular critter in the performing arts.

It is said that Italian opera, with its emphasis on story telling, human emotions and beautiful melody, is the ultimate manifestation of the art of song. A “song” is a work for a singer and some sort of accompaniment in which the words and the feelings behind those words are intensified and made sublime by the music to which they are set.

It is a fact that songs (defined as widely as we please) sung by singers touch us with a unique degree of expressive directness and power. We will always like (and sometimes love) dancers and actors, pianists and violinists, but singers enthrall us like no one else. As long as human beings want to communicate the sublime, the absurd, the joyful, and the tragic; as long as we want to tell a good story; as long as we want to tweak the nose of the establishment; as long as we want to express something of ourselves in the most direct and engaging manner possible, our first and best choice will always be to do it with song.

Lady Gaga is part of a long and noble continuum of theatrical musical story telling, individualized emotional expression, over-the-top flamboyance and media celebrity. It’s a continuum that goes back to the beginnings of opera and traces its line through the great pop/rock singers of the late twentieth century, from Sinatra to Elvis; Madonna to Gaga. Long may the line continue!