If music be the food of love, play on! 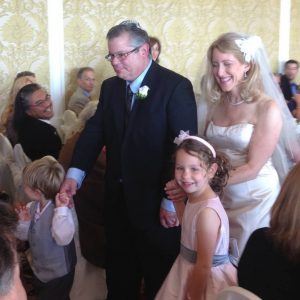 Nanci, yours truly, and my two young ones – Lillian and Daniel – as we recede down the aisle following the wedding ceremony.

“If music be the food of love, play on!” So spake Duke Orsino in Shakespeare’s Twelfth Night of 1602. Taking our cue from the good Duke (to say nothing for his creator, the extraordinary Billy S.), I would observe that since this site is about music, it must also then be about love (and food, about which we will deal another day).

Having broached the subject of love, I would beg your indulgence for the second time this summer as I wax personal.

On Saturday, September 21st – 85 days after my eldest daughter Rachel tied the knot – it was my turn: I married a magnificent woman named Nanci Tucker at the Claremont Hotel in Berkeley, California. Thus does the period my widowhood end, to which I say good freakin’ riddance.

Nanci is tackling a tough gig. Having moved out of her condo/loft in a hipper-than-hip south-of-Market San Francisco location, she has moved into my (now officially OUR) house in the hills of Oakland, here to deal with the demands of a husband and two young children (to say nothing for the evil commute back across San Francisco Bay to her place of work not far from the Pacific Ocean).

Nanci is equal to all challenges. A pediatrician by trade (I told her I would have preferred a mechanic or a plumber, but then again she can write perscriptions), she has already made our lives so much more joyful and complete that it is impossible to imagine life without her. So color me happy, satisfied, and humbled, words that do not trip easily from my lips.