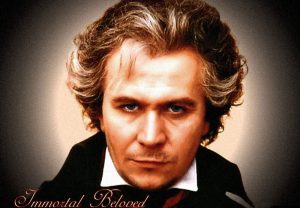 Suggestion number three for getting and keeping our kids interested in music: movies and videos.

We are visual creatures, and while I am generally not in favor of increasing screen time in our children’s lives, there are some movies and videos that are worth watching.

(FYI: I am not in any way an authority on this stuff and won’t pretend to be. My suggestions are merely those of a parent attempting to achieve a measure of peace in his house while doing his best to educate his kids without reducing their brains to blackcurrant jelly. Any and all comments/suggestions/burnt offerings from cyberville are invited and indeed, eagerly awaited.)

For littler ones, I would heartily recommend such movies as “Beethoven Lives Upstairs”, “Mr. Bach Comes to Call”, Disney’s “Peter and the Wolf” and “Fantasia 2000”. We’re not looking for historical truth here; just exposure. The great movie musicals are also wonderfully entertaining. For younger kids I would recommend the usual suspects: “The Wizard of Oz” (although the Wicked Witch of the West might be a bit scary for kids under 6), “Mary Poppins”, “Annie”, “The Music Man”, Disney’s “The Little Mermaid”, “The Lion King”, and “Chitty Chitty Bang Bang”. (For personal reasons, I have left out “The Sound of Music”, as I would prefer to be kicked to death than to ever have to watch it again. Consider this a character flaw.)

The most young child-friendly major opera is, in my most informed opinion, Mozart’s “The Magic Flute”. The English language-version (DVD) made by the Met in 2011 and conducted by James Levine is wonderful.

There is also an excellent set of videos made by Disney Junior called “Little Einsteins.” Each episode of the “Little Einsteins” series focuses on a different piece of concert music and teaches all sorts of musical terminology as well. My kids loved them.

For older kids there are, of course, many more sophisticated musicals, operas and concert performances to choose from. As “entry level” operas I would suggest (in their original languages; older kids can read subtitles!) Mozart’s “The Marriage of Figaro”, “Don Giovanni”, and “The Abduction from the Harem”; Rossini’s “The Barber of Seville”; Verdi’s “Rigoletto”, “Il Trovatore”, and “Aida”; Bizet’s “Carmen”; and Puccini’s “La Bohème”. (If you want to be really hip, play “La Bohème” and “Rent” on back-to-back nights. Same story; different time, place, and music.)

Finally, for older kids there are the various composer bio-pics: movies that we might love but movies that should come with a warning label, “this film does not let the facts get in the way of a good story.” “Amadeus” is a great movie but it is more fiction than fact. The same problem of historical fact versus dramatic fiction plagues “Immortal Beloved”, although Gary Oldman is brilliant and looks amazingly like Beethoven did in his thirties (as opposed to Ed Harris as Beethoven in the ludicrous “Copying Beethoven”). For what it’s a worth, “Impromptu”, with Hugh Grant as Chopin, Julian Sands as Liszt, and Judy Davis and George Sand is my favorite “composer” movie. (I have, properly, left Ken Russell’s “Lisztomania” and “Mahler” off this list, as they should be viewed only by consenting adults well after the children go to bed.)

(Yet another parenthetical statement. Off the record, because it is not appropriate for most kids, I must nevertheless identify what I believe to be the single best movie about music ever made: “This is Spinal Tap”. The. Single. Best. Music. Movie. Ever. Made.)