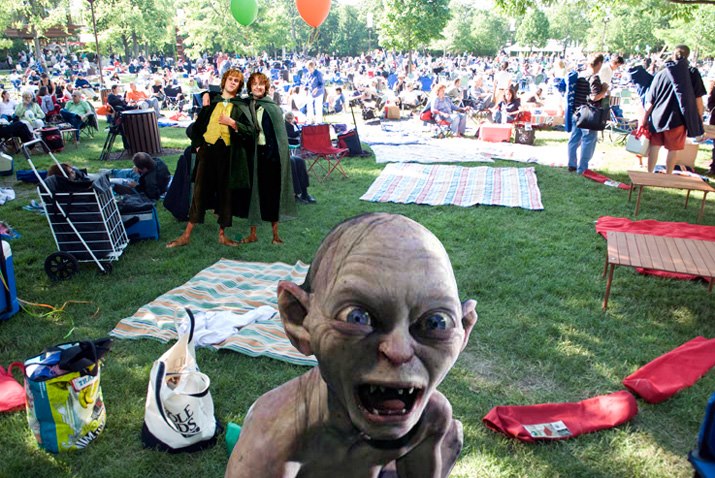 A happy (if dentally challenged) little fella dancing away on the lawn at Chicago’s Ravinia Festival.

Suggestion number four for getting and keeping our kids interested in music (FYI, suggestions numbers one through three were posted, respectively, on February 21, 24, and 25): introduce them to the unparalleled joy of live music, an experience is increasingly undervalued in our YouTubeocracy.

When home video tape recorders appeared back in the late 1970s, the movie industry screamed bloody murder, claiming that the technology spelled the end of the movie theater. Well, here we are, 35 years later, and there’s still no sign that movie theaters are about to go the way of dial up. Why? Part of it has to do with the visceral power of watching a movie on a large screen. But there’s another reason as well, and that has to do with the nature of the group experience. Yes, I will admit that the cretin sitting behind me chomping on his popcorn and the imbecile sitting in front of me playing with her cell phone and the numb-nuts chatting a few rows back drive me to distraction. Nevertheless, we are a tribal species, and it is a fact that we crave the collective: we experience things more intensely and completely when we do so as part of a community, including movies. We are hard-wired to do certain things in groups, and it’s highly unlikely that millions of years of evolutionary engineering will to be undone as a result of being alone in our cars and sitting in front of computers.

A story. In 1998 I was at Noordwijk-aan-Zee in the Netherlands, where I spoke at an program run by the late/great Arthur Anderson accounting, auditing, and consulting firm. At one of the lunches I got into a discussion with a fellow faculty member: a futurist who told me that in the future music would be “consumed” by listening to it in isolation chambers, free from the mob and any sensory distraction. I asked him to identify his single most memorable musical experience. Without a moment’s hesitation he told me about a Carlos Santana concert he attended in London as a teenager. 25 years later, sitting at lunch in in a conference center on the Dutch coast, he recalled the sights, smells, sounds, and communal joy of the experience as if it had occurred the day before. I smugly pointed out that his experience could not have occurred in an isolation chamber, at which point he fled towards the dessert table.

The point: music is not just “sound” to be experienced in isolation, but a whole-body experience. And to experience it most powerfully it must be shared with the collective, with the tribe. BUT WAIT, THERE’S MORE! Because: unlike a movie house, a concert hall (or a theater, or a lecture hall, or a religious gathering, or a political rally, or a sporting event) is a live venue, in which the audience/spectator plays an integral role in the performance itself. Performers, be they musicians, actors, teachers, religious leaders, public speakers, or athletes all tell us the same thing: that the energy they draw from an audience gets fed directly back into their performance, which then goes back out to the audience and is returned once again, in a continuous feedback loop. At a live concert we are all – performers AND audience – participants in the music making, and the sense of exhilaration we all feel at the end of a great performance reflects the shared effort that created that performance. An audience at a live event shares OWNERSHIP, because that audience plays an essential role in shaping that event.

We can’t get that from an isolation chamber or from YouTube.

No one is more aware of the power of live performance than performing arts organizations themselves. Despite the woeful state of music education in our schools, this may very well be a golden age of “music for kids” as a result of the extraordinary degree of community outreach currently engaged in by such organizations. Music-in-the-schools programs, children’s concerts and so forth have proliferated over the last decades as the performing arts community has come to realize that if they don’t create their future audiences, no on else will. As parents, we need to find out what’s available in our area and see to it that we – as a family – attend a few live events a year. An outreach program at school? Great: volunteer that day so that you and your child can share the experience. A children’s (or family) concert? Go as a family, with the promise of ice cream afterwards (my kids would walk over broken, flaming glass if they thought that ice cream would be waiting on the other side). Outdoor/festival concert? Fabulous: sit out on the lawn and let the kids dance along to their hearts’ content (though sit on the fringes to avoid distracting the child-averse).

Three of four concerts a year: that’s all I’m talking about. Color me naïve, but I do believe that for kids between 4 and 10, that’s all it takes to light the fire and, at the same time, build up a wealth of great musical memories.

« The String Quartet in Time of War: Dmitri Shostakovich, String Quartet No. 8 (1960)
Revisiting “The Music of Richard Wagner” »
Categories : Introducing Children to Music
Tags : How To Get and Keep Kids Interested In Concert Music, Live Music