Coming Out of a Month of Anniversaries

I received an email from a friend yesterday inquiring about my “radio silence” over the last few weeks. Aside from the occasional notice posted on this site, silent I have been: I have not actually blogged in over 6 weeks, since October 4th.

Not that I have been missed what with all the other nonsense going on in the world, but I would still offer up the following explanation, if only as a cautionary tale for those who might make the same mistake that I did.

October is, for me, a month of difficult anniversaries. I have learned, then, to occupy myself with mundane, repetitive tasks that preclude me from “thinking too much.” Consequently, this year I decided to begin a project I’ve been putting off for years: scanning family photos.

I do not have an addictive personality. Neither am I particularly obsessive, though my first spousal unit – not without justification – considered me to be an obsessive collector. However, nothing could have prepared me for the single-minded, all-encompassing obsession of going through and scanning photographs once I began the process. Cliché though it sounds, the experience was drug-like at times, as people, places and time flew past in a manner hallucinogenic. In the photos everyone is ageless: young and old simultaneously. Over and over again I re-experienced my childhood and that of my siblings, my parents, and my grandparents. I was reminded, constantly, of people lost and things that I’d thought I’d forgotten.

As a public service (and cautionary tale), I offer up a few of the things I learned during the last five-plus weeks.

Two. There is something about a photograph that distills feeling and meaning far beyond the power of most videos. A photo is frozen time: we can peruse it; we can study it; we can even insert our present selves into it.

Three: consciously or unconsciously, we “pose” when we know we are being photographed: that is, we represent ourselves in photographs in a manner that generally goes well beyond what we do when being videographed. Photos – even candid photos – project a certain intensified, idealized representation of their subjects.

Four. It’s easy to forget how much life we’ve lived and how many people we’ve loved and lost while we go about our daily lives. This is as it should be, as our first responsibility is to the present. But should we be so foolish as to handle and closely examine 12,000 family photos dating back to the 1890’s in a fairly short period of time, the past and present will merge into a singularity, with overwhelming (even devastating) emotional effect.

Basta; enough. I’m lucky to have had 37 days to invest in such a project, although my little “staycation” is now at an end. It’s time to get to work on my next The Great Courses survey (which will be recorded in January 2016; more on its contents in future posts); get ready for the December 2 premiere of “Scandalous Overtures” on Ora TV (about which I will be blogging weekly); start exercising again and otherwise rejoin the present.

Below, yours truly and my grandmother Bessie Hurwitz Greenberg, New York Institute of Musical Art (later renamed the Juilliard School), Class of 1916, in December of 1954. 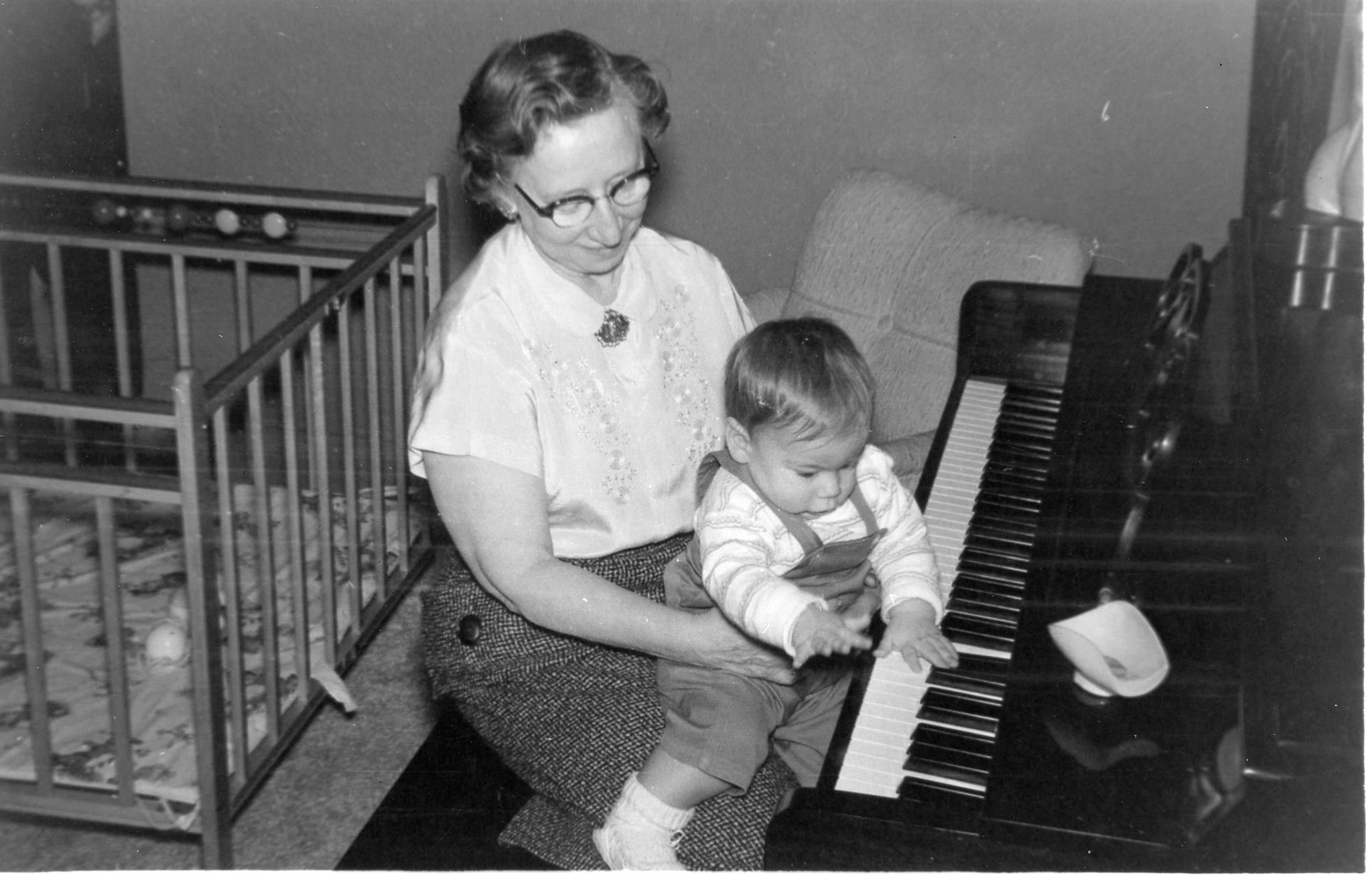