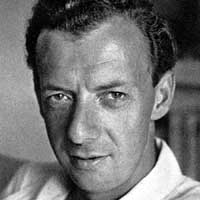 “[Britten’s mother was] determined that he should be a great musician.  Quite often we would talk about the three B’s – Bach, Beethoven, and Brahms – and the fourth “B” was [to be] Britten.”

His mother’s ambitions aside, Britten grew up in what he called “a very ordinary middle-class family” in Lowestoft, an East Anglian town on the North Sea 110 miles north east of London.

Britten began piano lessons at seven. At the age of eight, he was enrolled in South Lodge Preparatory School just down the hill from his family home. The headmaster of the South Lodge School was a math teacher named Thomas Sewell, a Cambridge graduate and World War One veteran then in his mid-thirties.  If you were good at math – as was Britten – you had no problems with Sewell.  But if your math skills were not up to snuff, well, Sewell spared not the rod.  In a 1971 interview, Britten recalled:

“I can remember – I think it was the very first day that I was in school – that I heard a boy being beaten, and I can remember my absolute astonishment that people didn’t immediately rush to help him.  And to find that [such beatings were] condoned and accepted was something that shocked me.  Whether or not ‘IT’ all grew from that I don’t know.”

“It” refers to Britten’s life-long pacifism.  His partner Peter Pears believed that Britten’s “it” did indeed start in response to Headmaster Sewell’s brutality.  Pears said:

“He [Britten] organized a [protest] at his prep school, about some beating or other, and he got into a certain amount of trouble over that.”

Britten began “writing” music when he was just five years old.  He described his early efforts as:

One such surviving work – written when Britten was just six – is entitled “Do You Know That My Daddy Has Gone To London Today.”

What we should take from this info is that Britten – like Mozart, Schubert, Mendelssohn, and Shostakovich – was a natural born composer, one who began writing music at the same time he began writing words.  Typical of such composers – who instinctively translate the events of every day life into music – Britten was prolific: he composed roughly 800 works – including “Do You Know That My Daddy Has Gone to London Today” – before his first publication at the age of 19.

Getting to Know Himself

A few months after that first publication Adolf Hitler came to power when he was appointed German Chancellor – the head of the government – on January 30, 1933.

Britten didn’t notice Hitler and the impending catastrophe at first.  He was too busy starting his own career and coming to grips with his homosexuality, which in England in the 1930’s was considered to be a criminal offence punishable – I kid you not – with a maximum sentence of life in prison.

As it often happens, it was a traumatic event that brought about Britten’s liberation.  On January 31, 1937, his mother Edith died of a heart attack.  Britten was crushed; he was the biggest mommy’s boy since Oedipus. But his mother’s death also freed him to be who he had to be.  Just five weeks later, on March 6, 1937, Britten attended a rehearsal of the BBC Singers.  Among those he lunched with that day was a tenor, who, at 27 was three years older than Britten.  The singer’s name was Peter Neville Luard Pears.

Despite Prime Minister Neville Chamberlain’s assertion that his negotiations with Hitler over the fate of Czechoslovakia had achieved “peace for our time”, the clouds of war were gathering fast over Europe in late 1938.  In January of 1939, Britten friend and mentor, the poet W. H. Auden moved to the United States.  Not for the first time in his life, Auden’s example rocked Britten world.  War was coming and he was a sworn pacifist.  There was opportunity in America as well: Britten’s work with the English film industry had garnered him some sweet financial offers from Hollywood.  So it was – for many reasons – that in April of 1939, Benjamin Britten and Peter Pears set out for America.

When the war broke out on September 1, 1939, Britten inquired as to whether he should return England. The British embassy told him to stay put, as only folks with technical skills were being repatriated.  And so he stayed and watched from afar as his reputation back home went in to the loo.  While young Brits were dying on the fields, beaches, and in the skies of EUROPE and the urban English population were hunkered down in bomb shelters, Benjamin Britten was seen as gallivanting safely around New York and California with his boyfriend in tow.  The music critic for The Times of London, Ernest Newman, dubbed the controversy “The Battle of Britten”.

In late 1941, Britten and Pears made up their minds to return to England and face the music, whatever tune that might be.  They arrived in Liverpool on April 17, after having spent the better part of three years in the United States.

As we might expect, conscientious objectors – “conchies”, as they were called by their fellow citizens – were not highly regarded in wartime Britain, where pretty much every family was touched by the war.  As it turned out, Britten and Pears were lucky.  To their surprise and relief, they were treated with equanimity on their return.  The fact is, both Britten and Pears got off lightly, primarily because of their pre-War reputations and because of way they hurled themselves back into the English musical scene.  There was no doubt then – as there can be no doubt now – that they served their country better by being musicians than they could have by being ambulance drivers or air-raid wardens.

Soon after the end of the War, Britten attended a party hosted by his publisher Boosey & Hawkes.  At the party he was introduced to the Jewish, American-born violinist Yehudi Menuhin.  Menuhin told Britten that he was about to travel to Germany to give recitals to concentration camp survivors. Britten was electrified and he begged Menuhin to take him along as his accompanist.  The pianist Gerald Moore, who was to be Menuhin’s accompanist, gracefully stepped aside in favor of Britten.

And so it was that in July of 1945, Benjamin Britten and Yehudi Menuhin arrived in Germany, where they gave two to three recitals a day for ten days.  Britten wrote to Peter Pears:

“Yehudi was nice, and under the circumstances the music was as good as it could be.  We traveled in a small car over bad roads, saw heavenly little German villages, completely destroyed towns, and millions of d.p.’S – [displaced persons] – some of them in appalling states, who were thrilled to be played to. We stayed the night in [Bergen] Belsen and I needn’t describe that to you.”

In his autobiography, Yehudi Menuhin did describe it:

“Men and women alike, our audience was dressed in blankets.  The seemed desperately haggard, and many were still ill.”

No matter where one stands on Britten’s status as a “conscientious objector”, it must be acknowledged that he was a man of courage and conscience, willing to enter the charnel house and bear witness.  The impressions he received during the trip were indelible: impressions of destruction, cruelty and survival in the face of unimaginable brutality.

The quartet was commissioned by a wealthy musical patron named Mary Behrend to commemorate the 250th anniversary of the death of the English composer Henry Purcell.  Britten donated his commission fee to support famine relief in India.

The quartet is cast in three movements.

The first movement is essentially monothematic, during which vastly different versions of the same theme alternate cheek-by-jowl.  In effect, the movement is through-composed – meaning that it exhibits almost constant change as it progresses – until, like some great tectonic collision, various versions of this single theme begin the stack, one atop the next, as the movement reaches its conclusion.

The second movement is a tarantella for muted strings. A tarantella is fast folk dance of southern Italian origin.  As the legend goes, the only way to combat the poisonous bite of the local wolf spider (called a “tarantula” after the region, Taranto) was to boogie a dance so fast and frenzied that the victim literally sweats out the poison.  This movement has been described by such varied ways as “eerie”, “uncanny”, and even “panic-stricken”.  In my opinion, Britten is here using the metaphoric power of the tarantella to purge the poison of Fascism from the body of humanity.

Movement three is the crowing glory of the quartet: a magisterial, nineteen minute-long movement in which Britten pays homage to Henry Purcell.  The title of the movement – “Chacony” – is an Anglicization of the word “Chaconne”.  A Chaconne is a Baroque era musical procedure in which a theme consisting of a bass line and/or a harmonic progression is repeated over and over again beneath ever changing stuff in the other voices.  Each repetition of the theme is called a variation.

The movement consists of the theme itself – nine measures long – followed by twenty-one variations, arranged in four groups.  These groups of variations are divvied up by three solo cadenzas: the first one for the ‘cello, the second for the viola, and the third for first violin.

These cadenzas also act like “operatic” recitatives that pave the way for the “ensembles” – the variations – that follow.  The operatic analogy is apt, as Henry Purcell was the greatest composer of English-language opera before Benjamin Britten!