I will have two works premiered this season. In the spirit of self-promotion I am posting the particulars and would then discuss the first of the premieres, coming up in November. 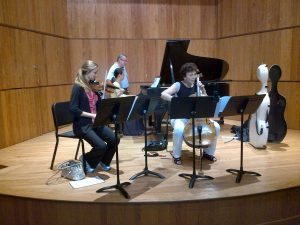 Trio 180 received their parts and scores for “180 Shift” about 6 weeks ago. They’ve been practicing, rehearsing, and asking me all the right questions since. They are, individually and collectively, smart, talented, and diligent: that wonderful trifecta that separates the wannabes from the pros.

It was a perfect first rehearsal. With 22 days to go until the premiere, Trio 180 is poised to absolutely nail the piece. And I breathed a sigh of relief: the piece does what I intended it to do and the players appear to be happy with it.

Below: a picture from the rehearsal, featuring Ann Miller on violin, Nina Flyer on ‘cello, and Sonia Leong at the piano.