Miracles: Franz Schubert and his String Quintet in C Major 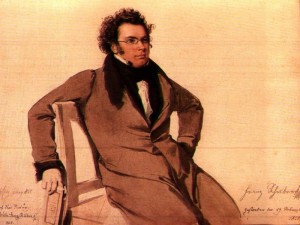 In his all-too-brief life, Schubert created a body of music the size and quality of which leaves us shaking our heads in wonder.  In the last sixteen years of his life, from the age of 15 to 31, Schubert produced, among other works: 9 finished and “unfinished” symphonies; 10 orchestral overtures; 22 piano sonatas; 6 masses; 17 operas; 637 songs; over 1000 works for solo piano and piano four-hands; around 145 choral works; 45 chamber works, including fifteen string quartets and one string quintet.

The tiny (about 5’ 1”), pudgy, be-spectacled Schubert was a compulsive composer.  He rather innocently described his routine this way:

“I work every morning.  When I have finished one piece I begin another.”

What makes Schubert’s amazing compositional output doubly miraculous was the physical condition in which Schubert labored under during the final 6 years of his life.

Sometime during the late summer or early fall of 1822, the 25 year-old Schubert contracted syphilis during a pleasure jaunt with his pal, a lowlife dandy named Franz von Schobar.

The first symptoms of the disease appeared in January of 1823 and they were bad: periods of painful lymphatic swelling, pustules, rashes, hair loss, lesions in the mouth and throat, and debilitating muscle aches.  Depression and despair followed and Schubert began to abuse both alcohol and tobacco.  Spiritual, emotional, and physical mess though he was, Schubert, miraculously, did not stop composing, and the music he did compose began to exhibit an altogether new degree of contrast and depth of expressive content.

In the fall of 1824 the 27 year-old Schubert’s syphilis entered its latent phase.  His health and good spirits began to return, although he was still prone to violent depressive jags, particularly when he drank – which meant often.

His dark days aside, Schubert had reason for hope, because for a lucky few syphilitics, latency was permanent.  Sadly, that was not to be Schubert’s fate.  During the summer of 1827, he begins experiencing recurring headaches.  By the fall, it was clear that Schubert’s three-year period of latency had come to its end and that his syphilis was once again advancing.

All of this, then, is the backdrop for the miracle that was the month of September 1828.  His increasingly severe headaches aside, Schubert accomplished what still seems, to this day, to have been impossible.  In the space of a few weeks, he completed his last three piano sonatas – in C Minor, A Major, and Bb Major; six songs from the Schwanengesang collection; and the String Quintet in C Major.  The quintet – scored for two violins, a viola, and two ‘cellos – is among the handful of greatest chamber works ever composed.  (That is not an opinion; that is a fact.)

With its sprawling, gloriously lyric themes, incredible harmonic detail, explosive contrasts, and juxtapositions of harmonic light and darkness, the Quintet is also the quintessential late Schubert work, in which expressive content is deepened immeasurably by the grievous circumstances of Schubert’s life experience.

The Quintet was to be Schubert’s last completed work. In mid-October of 1828 – just a few weeks after having completed the Quintet – Schubert’s appetite disappeared.  Weakened by tertiary syphilis and the toxic, mercury-based medications he was taking for the syphilis, Schubert took to his bed with a high, persistent fever, almost certainly caused by a bacterial typhoid infection.  Schubert died at three o’clock in the afternoon on November 19, 1828.

That may be.  But we do have the Quintet, and as Schubert’s “last musical will and testament”, it has no equal.