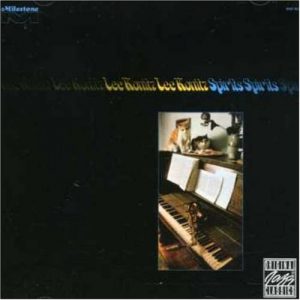 The cover photo of Lee Konitz’s album “Spirits” – which was taken in Lee’s living room – depicts his damper-challenged upright piano surmounted by his cats.

I studied jazz improvisation with the alto saxophonist Lee Konitz for the better part of a year between 1973 and ’74. As best as I recall, his apartment in New York City was on the East 30’s. He shared it with his wife and a two cats. Of the three, Konitz clearly had the better relationship with the cats. (One day I went in for a lesson and the place felt different; a bit dustier and more cluttered. His wife, who had always been around during my lessons, was nowhere to be seen. I asked after her. Konitz said, “My old lady’s GONE.” I said I was sorry to hear it. He said, “I’m not”, and that was the end of that conversation.)

Konitz was part of a small and elite group of musicians who had studied and/or worked with the pianist Lennie Tristano in the 1940’s, ‘50’s, and 60’s. This “Club Tristano” included the tenor sax player Warne Marsh, the pianist Sal Mosca, the guitarist Billy Bauer, and the bassist Peter Ind. What all these musicians had in common were mad technical skills and a penchant for improvising long, harmonically complex lines marked by a rhythmic asymmetry and phrase displacement more characteristic of the music of Igor Stravinsky and Béla Bartók than swing or even bebop. Given that as a young composition student I was, at exactly the same time, discovering and imitating the music of Stravinsky and Bartók, Konitz and the entire Tristano coterie were truly music to my ears. (Along with J. S. Bach, Beethoven, Stravinsky, and Bartók, Lennie Tristano is my single greatest influence as a pianist and composer, something I will write about in my next post.)

In retrospect, then, I was predisposed to like and understand Konitz’ work. But more than anything else, what Konitz taught me was how to LISTEN: to hear both individual harmonies and harmonic progressions in multiple dimensions and to improvise inside of those harmonies rather than simply “on top of them”; to listen to what I was playing and to force my fingers to do what was in my ear rather than allow them to simply run up and down the keyboard on their own accord. Technique I had, but thanks to Lee I learned to strive for taste; to listen for and find the right notes, to play in phrases.

Konitz had two pianos in his apartment. He had a spinet in his teaching studio where I took my lessons and on which I played duets with him. But more interesting was the big old upright he had in his living room, pretty much in the center of the apartment. He had all the dampers removed from the piano so that when he played a chord it would resonate – undamped – for thirty or forty seconds. It was Lee’s practice to strike a chord on the upright and then wander around the apartment with his sax, improvising on the harmony all the while (explaining, perhaps, why his wife ran off). I thought this was über-cool then, and I still do now. You see, to my mind, Konitz’ very best recorded works are his duets, in which he has the same sort of freedom from a steady pulse as he did when practicing in his apartment. As an example, listen again to the duet I posted on Saturday August 17 between Konitz and Chick Corea.

As a further example I’d direct your attention to my favorite Lee Konitz album, entitled “Spirits”, recorded in 1971. Half the album consists of duets between Konitz and the pianist (and Tristano student) Sal Mosca; the other half consists of quartet performances. The quartet cuts are good, but the duets are revelatory. (Sal Mosca – 1927-2007 – was a fantastic piano player. There’s nothing of his on YouTube except a documentary made near the end of his life when he was long past his prime. For those interested in hearing him play solo, I would recommend a solo album called “A Concert”, recorded live in June of 1979. Killer. Fabulous playing. Love it.)