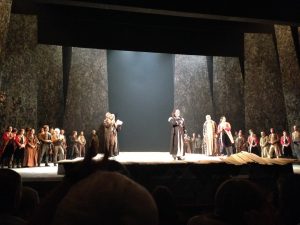 Artur Rucinski taking his bow after the performance of “The Bandits”

Hard to believe, it’s already a week since I/we left home in order to lead a Verdi opera tour in Italy.

We arrived on Wednesday, October 16 and are staying in a renovated thirteenth-century castle in an ancient village called Tabiano Castello in Emilia-Romagna, about 30 minutes south-west of Parma. This is Verdi territory; he grew up and lived in and around the city of Busseto, about 15 miles north of where I presently sit.

We are not suffering. While it goes without saying (although I’ll say it anyway), the food and vino are absurdly, insanely good. I fear I will need two adjacent seats on my return flight in order to accommodate my bloated body back. This is the home of REAL Parmesan cheese, “prosciutto di Parma”, Parma ham, Lambrusco (bubbly red wine), balsamic vinegar (yesterday, in Modena, we tasted 25+ year-old vinegar over vanilla gelato; unbelievably good), Bolognese sauce, and a thousand other delicacies.

But you are not reading this blog in order to follow my gluttony but rather, to hear about the performance of Verdi’s operas here in the heart of Verdi country. So here goes.

We have attended two operas thus far, “Don Carlo” on Saturday the 19th at La Scala in Milan, and La “Masnadieri” (“The Bandits”) on Sunday the 20th at the Teatro Regio in Parma.

“Don Carlo” was a mixed bag. Verdi composed the opera in 1867 for the Paris Opera. Bowing to French taste, Verdi delivered a massive, five-act grand opera set in French. He pared this Wagner-length behemoth down to four acts when it was translated into Italian and produced in Italy. And while the Italian version (which we heard) is – gratefully – 45 minutes (or so) shorter than the French version, it is inferior to the original. You see, without the original first act (which Verdi eliminated in the Italian version), everything is out-of-whack. Like missing the first 20% of a movie, many key aspects of the story go unexplained. For example, the lead story of the opera is the unconsummated love between Prince Carlo of Spain (Don Carlo of the title) and Princess Elizabeth of France. Despite their betrothal, Elizabeth is ultimately married off not to Carlo but to his father, the rotten Philip II, King o’ Spain. With the first act missing, we never witness the meeting and falling in love of Carlo and Elizabeth that motivates the remainder of the story. At the same time, Elizabeth’s character seems entirely trivial, at least until her closing, final-act duet with Carlo. But even that closing duet seems contrived (and frankly endless), unbalanced as it is by a first act duet that was eliminated by the cut.

The orchestra, though it played beautifully, was also too loud, consistently drowning out the voices of the female leads, Elizabeth and the Principessa Ebboli (NOT Ebola, as a number of my charges referred to her). This was unforgivable, for which the conductor Fabio Luisi should be punished by being forced to watch the entire seven-season run of “Green Acres”.

Having said all of this, the singing was superb. In particular, René Pape as King Philip II and Fabio Sartori as Don Carlo were wonderful.

In contrast, “I Masnadieri” (hereafter simply “The Bandits”) was a vocal and dramatic triumph, a near-perfect production of a rarely-performed opera. The intimacy of the Teatro Regio in Parma helped (about 1000 seats, as opposed to La Scala’s 2800). But really, what made the performance so wonderful was the cast, which performed like a dedicated ensemble of actors rather than a bunch of individual opera singers, and the conductor Francesco Ivan Ciampa, who balanced everything perfectly and kept the story chugging along at proper pace. I would single out the AMAZING Polish baritone Artur Rucinski, who played the role of the magnificently evil Francesco. Truly, there’s nothing better than a great villain, and Rucinski was a brilliant great villain. (FYI: he can be seen on the one-and-only DVD performance of “The Bandits”, issued earlier this year on the Unitel Classica label.)

“The Bandits” is rarely performed; in our group of 45, some of whom are true opera jocks, not a single person had ever seen a live performance of ”The Bandits”. I would suggest that if “the Bandits” had been created by any other composer, it would in all likelihood be considered that composer’s magnum opus, a career capping work, a minor masterpiece that might very well have secured a place in the repertoire. But it was composed by Giuseppe Verdi between Macbeth and Luisa Miller, Rigoletto, Il Trovatore, and La Traviata. Talk about being dwarfed by its more popular siblings. (“Being dwarfed by a more popular sibling”: that, by the way, is what “The Bandits” is all about). Having said all of that, I’ve no doubt that if more folks could see a production of “The Bandits” like the one we saw, it would become a repertoire standard post haste.