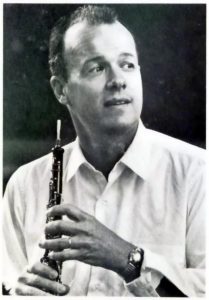 I have spent the last four days writing up a calendar of events discussed in my twenty-six in-print The Great Courses/Teaching Company courses. (The calendar presently runs 70 pages in length. By the time I finish – with luck, tomorrow – it will run about 90 pages.) My intention is to choose one or two date-appropriate items per week, and post them along with a link to the appropriate Great Courses course. My thinking here is that a spoon full of info helps the shameless self-promotion go down.

We lift a glass in a birthday salute to a dear departed friend and former colleague of mine, the American oboist John de Lancie, who was born on July 26, 1921 in Berkeley California and died on May 17, 2002 in Walnut Creek, a suburb of San Francisco. Aside from being one of the greatest oboists of the twentieth century, a brilliant educator and a ferociously exacting oboe teacher, de Lancie was personally responsible for the composition of the single greatest oboe concerto written during the twentieth century: Richard Strauss’ stunning Oboe Concerto in D Major of 1945.

Strauss (1864-1949) rode out the end of World War Two at his country house in Garmisch in the Bavarian Alps, which was part of the American zone of occupation. In April of 1945, an American detachment was sent to commandeer Strauss’ villa but stopped when Strauss identified himself as “the composer of Rosenkavalier and Salome.” A young OSS (military intelligence) officer named John de Lancie heard what had happened and high-tailed it to the villa. Before being drafted into the army, de Lancie had been principal oboist with the Pittsburgh Symphony. (He went on to be the principal oboist with the Philadelphia Orchestra and Director of the Curtis Institute in Philadelphia; he ended his career at the San Francisco Conservatory where we were colleagues.) The 24 year-old de Lancie introduced himself to the 81-year-old Strauss and became a regular visitor to the villa. During one of his visits, de Lancie asked Strauss if he had ever considered writing an oboe concerto. Strauss said no, and that was the end of that.

Until six months later, when Strauss published an oboe concerto. The autograph of his score bears this inscription:

“Oboe Concerto/1945/suggested by an American soldier.”

It’s a great story. Hear more of it, as well as excerpts of the concerto, in Lecture 12 of my Great Courses survey, “The Concerto.”