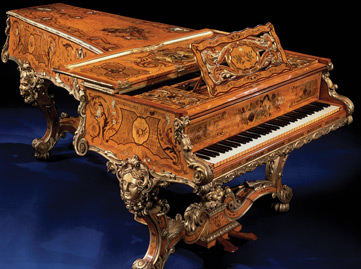 As a solo concert instrument, the piano enjoys an unrivaled popularity in Western music. Capable of a vast sonic range, from ethereal softness to thundering grandeur, its appeal is global and seemingly eternal. For nearly 200 years, audiences have packed concert halls and opera houses to hear performers play this single, phenomenal instrument.

One of the primary reasons for the piano’s popularity is the fact that it has inspired many of the greatest compositional masterworks in the concert repertoire. The piano’s harmonic and melodic capabilities, tone colors, and orchestral resources have fascinated composers—the majority of them highly accomplished pianists themselves—since the mid-18th century. The result is a magnificent body of work, from the intricate and lyric creations of the High Baroque and Classical masters to the passionate visions of Romantic virtuosos to the revolutionary sonorities of pianistic “impressionism” and modernism.

Within the rich repertoire of the piano, a group of unique masterworks stand out as the greatest achievements of this tradition. These historic milestones in piano writing are celebrated for several key reasons:

To study these works and to understand their genius and enduring appeal is to know one of the greatest accomplishments of Western culture, works that provide pleasure even as they deepen your insight into the power and meaning of music.

In The 23 Greatest Solo Piano Works, Great Courses favorite Professor Robert Greenberg of San Francisco Performances returns with an in-depth exploration of the solo piano works he considers to be among the most exceptional landmarks in the literature. The 23 works you’ll study represent the selections of an internationally respected composer and music historian, carefully chosen to highlight the most significant compositional and pianistic achievements in the solo piano repertoire.

Encounter a Magnificent Tradition in Art

These 24 engrossing lectures guide you through more than 200 years of music. Beginning with the towering figure of Bach, followed by Mozart and Beethoven, you encounter the piano music of such great 19th-century masters as Chopin, Schumann, and Liszt, before moving forward to visionary modernists including Scriabin, Debussy, and Prokofiev. In Professor Greenberg’s trademark style, each lecture focuses on a single work in a fresh, accessible encounter with the musical substance of the piece, welcoming listeners new to concert music as well as experienced concert music lovers.

In addition to your study of the music, the lectures expose you to a rich panorama of music history. You dig deeply into the artistic and social environments that the compositions reflect, shedding light on what inspired these great works and how they were created. As a third key layer of the course, you delve into the extraordinary history of the piano itself, discovering the ways in which the evolution of the instrument directly affected the music that composers wrote for it.

As a compelling feature of the video version of this course, the three dynamic concert pianists who play most of the musical excerpts encountered during the course appear on camera. This is a unique chance to not only hear the music superbly played, but to watch the pianists at the keyboard and to observe the extraordinary “choreography” of hands and body that goes into a performance.

Within the wide range of periods and styles you study, you’ll explore these timeless works:

The Piano: History of a Cultural Treasure

Parallel with the unfolding of the musical repertoire, you follow the history of the piano’s technological evolution, from the development in 1700 of the first piano “action”—a mechanism enabling the instrument to produce gradations of volume from soft to loud—through successive design innovations that increased the instrument’s power and resonance, culminating with the fully modern piano of the 1870s. Here, you discover how changes in piano design made entire new types of keyboard music possible.

You learn, for example, about the “double escapement” mechanism, pioneered in the 1820s, that made fast repeated notes possible and allowed Liszt to create a sort of piano music that could never have been played on earlier pianos. And you grasp how Debussy used the resonance and overtones of the modern piano to create the shimmering, otherworldly atmospheres that characterize his piano writing.

In studying the individual works in the course, you learn about the musical forms and structural procedures that underlie them—such as sonata form, rondo form, fugue, and canon—allowing you to follow the music’s structure as you listen, and also to appreciate the masterful use of these forms. Understanding sonata form, for example, allows you to appreciate how Prokofiev’s thoroughly modernist use of the form differed from its use by Beethoven and Liszt before him, and how the three composers employed this same musical structure to realize hugely different expressive visions.

You also learn in detail about the compositional means used by the great composers for the piano to realize their creative impulses. Early in the course, you see how Bach used the musical pitches of his Fugue no. 4 to depict the Christian cross, making explicit his own identification with Christ’s suffering. Later, you study Schubert’s glorious use of lyric, thematic melodies. And you learn how Alexander Scriabin, fulfilling a vision of music as spiritual revelation, employed a “mystic chord” to create a sound outside of traditional tonality.

Throughout the lectures, you look penetratingly into the circumstances surrounding the composition of the individual works and the historical background of their writing. In this inquiry, Professor Greenberg provides fascinating glimpses into the process of musical creation and reveals insights into some of Western art’s most remarkable personalities:

In The 23 Greatest Solo Piano Works, you’ll delve deeply into a body of works that have enthralled, astounded, and profoundly moved generations of listeners. An educational journey you won’t find anywhere else, these twenty-four, 45-minute lectures give you the knowledge and insight to enjoy and appreciate the stunningly diverse literature of the piano.

Join a master composer and musicologist in discovering these great works of art, which make the solo piano tradition one of the superlative, enduring riches of our culture.